RocksDB, InnoDB and the insert benchmark

Today I share results for RocksDB and InnoDB using MySQL 5.6 and the insert benchmark. I have many more results that I am currently sharing with engine vendors to help them improve (WiredTiger) or to show them the potential of RocksDB. Percona has embraced MongoRocks. I hope to see similar support for MyRocks in a widely used MySQL distribution.

tl;dr - RocksDB did better than InnoDB for a write-heavy workload and a range-scan heavy workload. The former is expected, the latter is a welcome surprise. I hope we get RocksDB into a supported MySQL distribution to make it easier for you to try it.

I have been running several database benchmarks on a variety of hardware, storage, database engines and configurations. The benchmarks include the insert benchmark, linkbench and sysbench. The hardware includes dual-socket, many-core servers with 144G or more of RAM and a 1-socket, few-core server.  The few-core server has 2 cores, 4 HW threads and is an Intel NUC 5i3ryh with 8G of RAM and a Samsung m.2 SSD. The storage includes m.2 SSD (Samsung 850 EVO 110G), older PCIe SSD and newer NVMe SSD. The engines include RocksDB, InnoDB, MyISAM and TokuDB for MySQL and RocksDB, WiredTiger and mmapv1 for MongoDB. The configurations include databases that fit in cache and databases that do not. Even when the database fits in cache the workload can be IO-bound from the writes required to persist a database.


If you just want the graphs here they are. 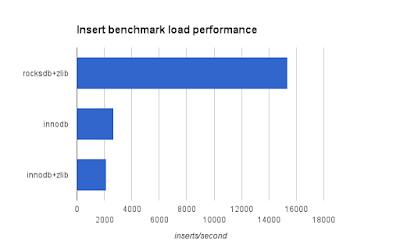 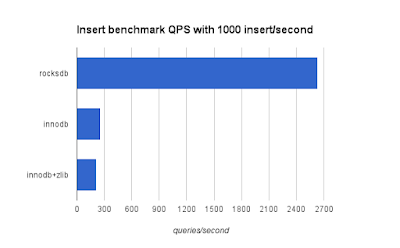 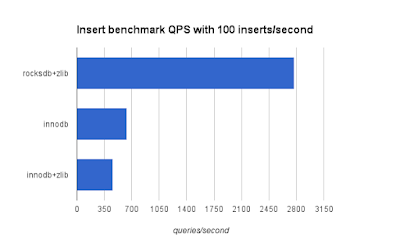 The workload is the insert benchmark using the pattern described below. I use this pattern to include a mix of workloads (write-only, reads with write-heavy, reads without write-heavy). I don't include a read-only step. The mixed workload (reads + writes) is very important especially when the database is larger than RAM:

The metrics I use for performance are throughput and response time. For performance I measure the average rate for queries and inserts. I also want to determine whether there are stalls in throughput so the benchmark client reports average throughput per interval (~10 seconds each) and at test end I compute the 50th, 75th, 90th, 95th and 99th percentile per-interval throughput. For many tests including the insert benchmark it is even better to show throughput over time as some database engines suffer from stalls or throughput degrades. Some of that is visible via the p95 and p99 throughput metric.

For efficiency I measure HW consumed per operation and including CPU microseconds, storage reads, storage KB read/written. For efficiency I also include the database size and the RSS of the database process. I don't distinguish storage reads and writes done for user inserts versus those done for user queries. If the storage read rate is 200/second, the query rate is 10/second and the insert rate is 5/second then the metrics below will show 20 reads/query and 40 reads/insert.

I usually ignore storage writes for 2 reasons. First, the penalty for random writes is small with SSD. Endurance is still an issue and KB written captures that. Second, it is hard to distinguish between slow and fast write operations. Some write operations are fast because they are mostly sequential or are small log writes that benefit from battery backed write cache on a RAID device.

I use vmstat and iostat to collect efficiency metrics. Note that Linux in mid-2016 still counts trim as bytes written. So with a database engine like RocksDB that deletes files as frequently as it creates them in the steady state and a kernel+filesystem+device setup to do trim on file delete then KB written as reported by iostat will be twice the real rate. You can confirm this by comparing iostat metrics with metrics reported by your SSD.

I used a 2G block cache for RocksDB which uses the rest of RAM for compressed blocks in the OS page cache. I used a 6G buffer pool for InnoDB which used direct IO.

For RocksDB I used Facebook MySQL with the git hash 2406e9. For InnoDB I used 5.6.29 and 5.7.10. All mysqld builds used jemalloc. The binlog was enabled for all tests but sync-on-commit was disabled for the database engine and the binlog. The server runs Ubuntu 14.04.

MyRocks is changing fast. I used a build from May 7 and since then several performance bugs have been fixed. My my.cnf settings for RocksDB are also stale compared to the latest & greatest values suggested by Yoshinori. It is fun to work on a project that improving so quickly.


Results with inserts limited to 1000/second


RocksDB gets more QPS because it does fewer reads from storage per query. That is expected for uncompressed InnoDB because that database is about 2X the size compared to RocksDB. But the compressed InnoDB database isn't much larger than RocksDB so it should be able to keep a similar amount of hot data in cache. I wonder if key prefix compression as done by RocksDB allows it to get a better cache hit rate.

RocksDB also benefits from not doing reads for non-unique secondary index pages during index maintenance. That is a write-only operation for RocksDB.

Results with inserts limited to 100/second