My old NUC cluster found a new home and I downsized to 2 new NUC servers. The new server is NUC8i7beh with 16g RAM, 500g Samsung 860 EVO for the OS and 500g Samsung 970 EVO for performance. The Samsung 860 is SATA and the Samsung 970 is an m.2 device. I expect to wear out the performance devices as I have done that in the past. With the OS on a separate device I avoid the need to reinstall the OS when that happens.

The new NUC has a post-Skylake CPU (i7-8559u), provides 4 cores (8 HW threads) compared to 2 cores (4 HW threads) in the old NUCs. I disabled turbo boost again to avoid performance variance as mentioned in the old post. I am not sure these have sufficient cooling for sustained boost and when boost isn't sustained there are frequent changed in CPU performance. I also disabled hyperthreads out of concern for both the impact from Spectre fixes and to avoid a different syscall overhead each time I update the kernel.

I might use these servers to examine the impact of the ~10x increase in PAUSE times on InnoDB with and without HT enabled. I might also use them for another round of MySQL performance testing when 8.0.14 is release.

I am a big fan of Intel NUC servers. But maybe I am not a fan of the SATA cables they use. I already had one of my old NUCs replaced under warranty after one of the SATA wires was bare. In the new NUCs I just setup a few of the SATA cables appear to be cut and I wonder if that eventually becomes bare.
Posted by Mark Callaghan at 12:05 PM No comments:

I have written before and will write again about using 3-tuples to explain the shape of an LSM tree. This makes it easier to explain the configurations supported today and configurations we might want to support tomorrow in addition to traditional tiered and leveled compaction. The summary is that n LSM tree has N levels labeled from L1 to Ln and Lmax is another name for Ln. There is one 3-tuple per level and the components of the 3-tuple are (type, fanout, runs) for Lk (level k) where:

Given the above how many valid configurations exist for an LSM tree? There are additional constraints that can be imposed on the 3-tuple but I will ignore most of them except for limiting fanout and runs to be <= 20. The answer is easy - there are an infinite number of configurations because fanout is a real.

How do you configure an LSM tree with leveled compaction to minimize write amplification? For a given number of levels write-amp is minimal when the same fanout (growth factor) is used between all levels, but that does not explain the number of levels to use. In this post I answer that question.

I don't recall reading this result elsewhere, but I am happy to update this post with a link to such a result. I was encouraged to answer this after a discussion with the RocksDB team and thank Siying Dong for stating #2 above while leaving the math to me. I assume the original LSM paper didn't address this problem because that system used a fixed number of levels.

I solve this for pure-leveled compaction which differs from what RocksDB calls leveled. In pure-leveled all levels used leveled compaction. In RocksDB leveled the first level, L0, uses tiered and the other levels used leveled. I started to explain this here where I claim that RocksDB leveled is really tiered+leveled. But I am not asking for them to change the name.

Assuming the cost function is convex (see below) the critical point is the minimum for write-amp. However, n must be an integer so the number of levels that minimizes write-amp is one of: ceil(ln(t)) or floor(ln(t)).

The graph for wa when t=1024 can be viewed thanks to Desmos. The function looks convex and I show below that it is.

Determine whether critical point is a min or max

The critical point found above is a minimum for wa if wa is convex so we must show that the second derivative is positive.

Therefore wa'' is positive, wa is convex and the critical point is a minimum value for wa

This has nothing to do with databases. This is a review of a Pixelbook (Chromebook laptop) that I got on sale last month. This one has a core i5, 8gb RAM and 128gb storage. It runs Linux too but I haven't done much with that. I expected a lot from this given that my 2013 Nexus 7 tablet is still awesome. I have been mostly happy with the laptop but if you care about keyboards and don't like the new Macs thanks to the butterfly keyboard then this might not be the laptop for you. My 3 complaints: 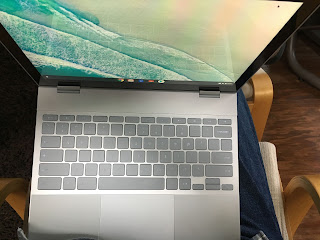