This extends the performance evaluation using the insert benchmark on a server with fast storage. After the load extra tests were run using different numbers of insert and query threads. The load was done for 2B documents with a 256 byte pad field. The databases are at least 500G and the test server has 144G of RAM and 40 hyperthread cores. My conclusions are:

More details on the configuration for mongod is in the previous post. The tests here were run after the database was loaded with 2B documents that used a 256 byte pad field. After the initial load the database was ~620G, ~630G, ~1400T and ~500G for TokuMX, WiredTiger, mmapv1 and RocksDB. I used my fork of iibench for MongoDB (thanks Tim) to support more than 1 query thread.  My fork has an important diff to avoid reusing the same RNG seed between tests. The range query fetches at most 4 documents via the QUERY_LIMIT=4 command line option. Tests were run in this sequence:

This is the QPS from the 10 query threads with and without a concurrent insert thread. The result for 1i.10q is from the run where I increased the value of this parameter to get better performance, although the overhead from it is much more significant with a disk array than with PCIe flash --internalQueryCacheWriteOpsBetweenFlush. There are a few things to note here: 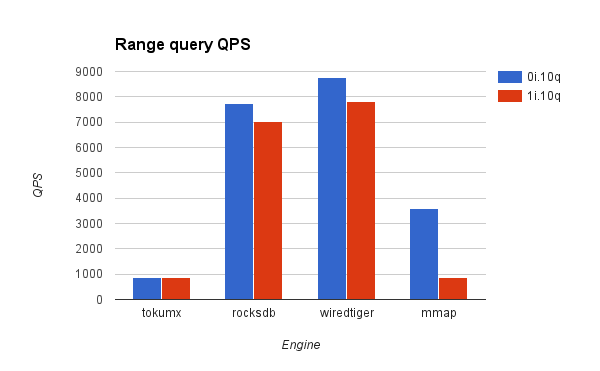 The tables that follow have results for each of the tests. The results include:

These are results for the 10i.1q test. WiredTiger has significant variance for the insert and query rates. Bugs have been opened for this problem and progress has been made but I think some bugs are still open. The query rate for mmapv1 is very low as described earlier in this blog post.

These are results for the 0i.10q test. WiredTiger and RocksDB get about 10% more QPS compared to the 1i.10q result. The QPS for mmapv1 improves by ~4X because it isn't slowed by the RW lock from the insert threads. TokuMX continues to suffer from the CPU bottleneck.

I was too lazy to copy this into a table. This has results from iostat and vmstat, both absolute and normalized by the operation (query or insert) rate. The values are:
WiredTiger and RocksDB sustain the highest QPS because they do the fewest storage reads per query. The range read penalty from an LSM doesn't occur for this workload with RocksDB. The CPU/operation value is more than 25X larger for TokuMX (0.085000) than for the other engines (0.003104 for RocksDB). TokuMX is also doing almost 4X the disk reads per query compared to RocksDB. I hope we can figure this out. The storage reads per query rate is much higher for mmapv1 in part because the database is much larger and the cache hit rate is lower.

These are results for the 10i.0q test. The insert rate improvement versus 10i.1q is larger for TokuMX than for RocksDB. I assume that TokuMX suffers more than RocksDB from concurrent readers. WiredTiger still has too much variance in the insert rate.

The CPU utilization and storage IO per insert is lower for RocksDB & TokuMX. This is expected given they are write-optimized and benefit from not having to read secondary index pages during index maintenance. mmapv1 suffers from doing more disk reads and using more CPU.

These are results for the second 1i.10q test. The QPS rates for RocksDB, WiredTiger and mmapv1 are better than in the first 1i.10q test because mongod was changed to cache query plans for a longer time.

I want to understand why TokuMX uses more than 25X the CPU per query than other engines. The high CPU load comes from eviction (flushing dirty data so block cache memory can be used for disk reads) but it isn't clear to me why eviction should be so much more expensive in TokuMX than in WiredTiger which also does eviction. RocksDB doesn't show this overhead but it does compaction instead of eviction.

I reloaded the TokuMX database with 2B documents, let it sit idle for 1 day and then started the 0i.10q test. From a flat profile with Linux perf the top-10 functions are listed below. Then I ran PMP and from stack traces see that eviction is in progress which explains why QuickLZ compression uses a lot of CPU because data must be compressed during eviction. From stack traces I also see that the query threads are stalled waiting for eviction to flush dirty pages before they can use memory for data read from storage. This is a common place where a database engine can stall (InnoDB and WiredTiger have stalled there, maybe they still do) but the stalls are worse in TokuMX.

I ran the 0i.10q test overnight and after 20 hours QPS has increased from 1074 to 1343. The CPU bottleneck from the partial eviction code remains. Partial eviction and waits for it are still frequent per PMP stack traces. The top-10 functions by CPU used are: