Yesterday I shared a benchmark report to compare MyRocks and InnoDB for Linkbench on a server with PCIe flash. One of the results was that InnoDB writes much more to storage per query, between 8X and 11X more. This is not a good thing because flash devices have a finite endurance and writing too much can lead to replacing the device too soon.

The results from yesterday used iostat to measure how much InnoDB writes to storage. The results from today use the counters on the storage device and the data from iostat. The total writes reported by the storage device will be larger than the value reported by iostat because flash GC runs in the background to make flash blocks ready for writing.  The ratio of device writes divided by iostat writes is the flash WAF (write amplification factor) and is >= 1.

On my storage device the flash WAF is much larger with InnoDB than with MyRocks. The flash WAF is about 1.4X for compressed InnoDB, 1.7X for uncompressed InnoDB and 1.03X for MyRock. This means that InnoDB writes between 11X and 18X more to storage per query compared to MyRocks. This is a huge difference which can force you to use high endurance flash for InnoDB when low endurance is sufficient for MyRocks. It can also force you to replace your storage device faster than desired. Note that excessive over-provisioning is similar to early replacement -- in both cases you buy more devices.

This chart displays the flash WAF per engine using the data from column 3 in the table above. 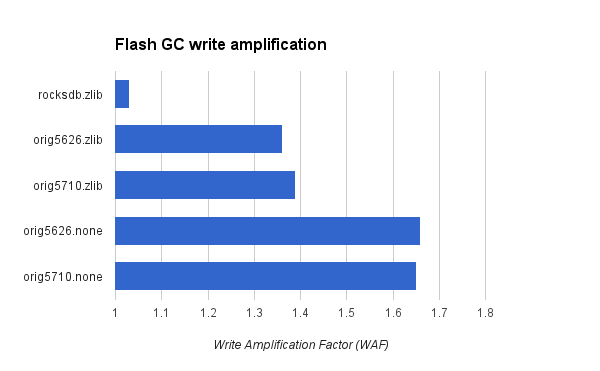 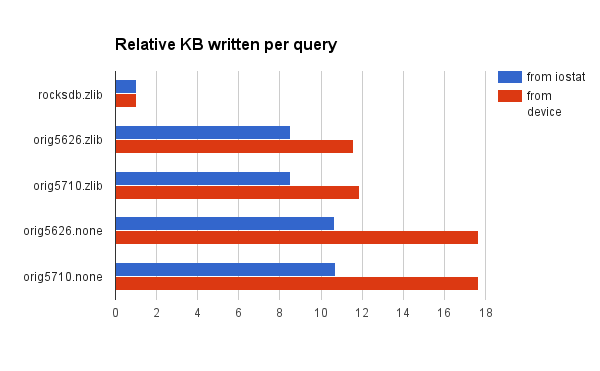