RocksDB vs InnoDB via Linkbench : performance and efficiency

MyRocks can reduce by half the hardware, or at least the storage hardware, required to run Linkbench compared to InnoDB. That is kind of a big deal.

A significant performance problem was recently fixed in MyRocks courtesy of the SingleDelete optimization. With this optimization RocksDB removes tombstones faster so that queries encounter fewer tombstones and waste less time on them. We hope to get the same feature into MongoRocks. I have been waiting a few months for this change and started another round of Linkbench tests when it arrived.

Performance and efficiency for MyRocks look great relative to InnoDB. We are far from done but I am amazed we reached this state so fast. The performance summary from my recent tests with IO-bound Linkbench and PCIe flash:

This isn't a problem with MyRocks. It provides 2X better compression than compressed InnoDB for Linkbench. It also provides a write rate that is much less than half the InnoDB rate. When InnoDB uses 2 TB of storage and writes 100 MB/second to storage then MyRocks uses 1 TB of storage and writes less than 50 MB/second to storage. Alternatively we can put twice the number of databases on the server without increasing the storage or endurance requirements. For a server with 4 TB of storage we can either run 2 InnoDB databases that are 2 TB each and sustain 200 MB/second of writes or we can run 4 MyRocks databases that are 1 TB each and sustain less than 200 MB/second of writes. This assumes the server has sufficient CPU capacity.

Note that InnoDB writes more than 8X the number of bytes to storage per query compared to MyRocks. Many more details on that are below.


I used my Linkbench repo to compare MyRocks with InnoDB in MySQL 5.6.26 and 5.7.10 with my.cnf files for MyRocks, 5.6.26 and 5.7.10. The test server has 2 sockets, 10 cores (20 HW threads) per socket, 144 GB of RAM and 3+ TB of PCIe flash. For Linkbench I configured loaders=20, requesters=20, maxid1=1B and maxtime=3600. The test pattern is first do the load and then run the query step 24 times for 1-hour each time. I collect performance data from MySQL, vmstat, iostat and the storage device during the tests. This is the schema for MyRocks, compressed InnoDB and uncompressed InnoDB.

This shows the database size at the end of each 1-hour query steps. The step function exists on the orig5710.none graph because the size is rounded to the nearest 100 GB once the size is >= 1 TB. Later in this post I show that MyRocks sustains a higher QPS during the query steps so it added the most data to the database. But the size growth is larger for InnoDB and likely caused by index fragmentation. This is the data for the graph. MyRocks uses less than half the space compared to compressed InnoDB. 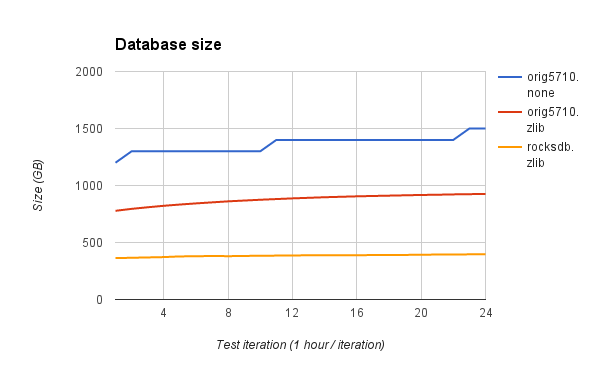 
This displays the rate at which rows are inserted during the load with 20 concurrent clients. Uncompressed InnoDB has the best rate but I strongly prefer to use compression for this workload. Regardless I will debug this to see what can be done to help MyRocks have the best load rate on SSD. The data for the chart is here. 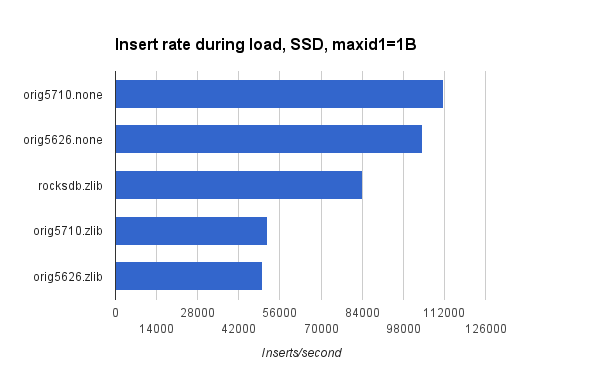 
This displays the average QPS from each 1-hour query step of Linkbench. The rate for compressed InnoDB increases significantly during the load because it suffers from contention as the b-tree becomes fragmented and page splits are done and this occurs more often immediately after the load. The data for the graph is here. The QPS for MyRocks is much higher than for all of the InnoDB configurations. 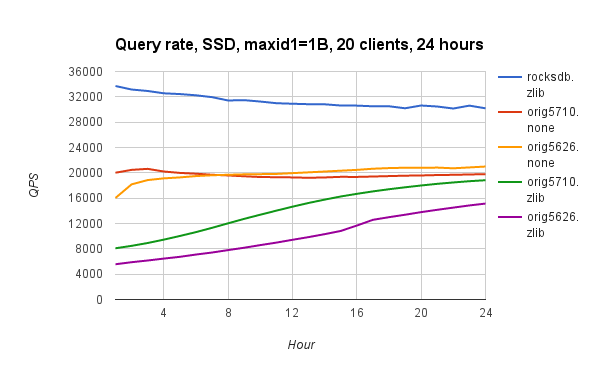 
MyRocks is more IO efficient than InnoDB for Linkbench. It has the lowest per-query rates for disk reads and disk bytes written. I think it does fewer disk reads because it keeps more data in cache. One reason is that InnoDB wastes space in the buffer pool for uncompressed pages courtesy of b-tree fragmentation. There are other reasons I won't describe here. There are several benefits from doing fewer disk reads. First, you can get more throughput when the storage device is close to saturation. Second, you use less CPU for decompression because every page must be decompressed after the read. Finally, you waste less time managing the buffer pool -- page eviction has been a source of performance problems for InnoDB. The data for the chart and graph is here. 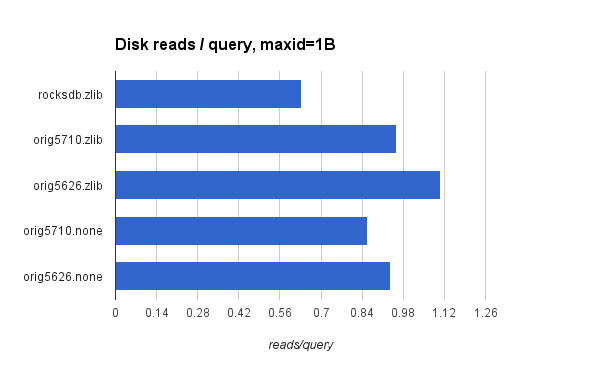 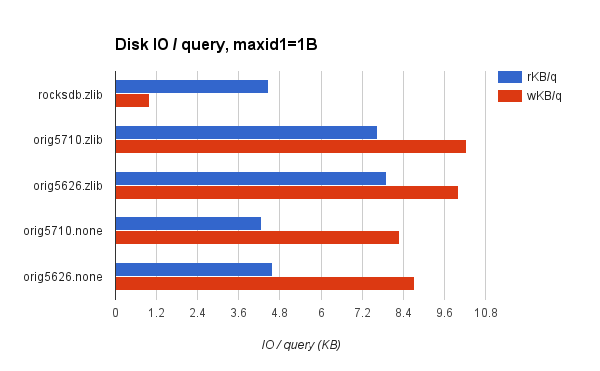 
Linkbench has 10 database transactions and reports response time metrics per transaction type. The transactions are ADD_NODE, UPDATE_NODE, DELETE_NODE, GET_NODE, ADD_LINK, UPDATE_LINK, DELETE_LINK, COUNT_LINK, MULTIGET_LINK and GET_LINKS_LIST. By far the most frequent transaction is GET_LINKS_LIST which requires a short range scan on a covering secondary index. The workload is explained in a blog post and conference paper. For the 24th 1-hour run the metrics are listed here per engine (MyRocks, InnoDB) and then reordered with results per transaction type for all engines. From the latter it is clear that while maximum response times are usually better for InnoDB the average and p99 response times are much better for MyRocks.

Posted by Mark Callaghan at 4:48 PM