In this post I share results from sysbench with an IO-bound workload on Intel NUC servers. My previous post shared results from an in-memory workload. This is part of my work from bug 86215 as I identify CPU performance regressions from MySQL 5.6 to 5.7 and 8.


My servers are described here. The charts below refer to the servers as i3 NUC and i5 NUC. Compared to the i3 NUC, the i5 NUC is newer, has a CPU that is 2X faster, 2X more RAM and storage that is more than 2X faster.

My usage of sysbench, including the tests run, and the my.cnf used for each database engine is described here. The my.cnf files I share were for the i3 NUC. For the i5 NUC the InnoDB buffer pool and IO capacity options were increased using these values. I use the same server for mysqld and the sysbench clients. The binlog is enabled but sync-on-commit is disabled. Sysbench is run with 4 tables and 40M rows per table. The database is larger than RAM. Although in future tests I might need to use larger tables for the i5 NUC which has twice the memory of the i3 NUC.

I first ran these tests on the i3 NUC and then was curious about performance on a more modern CPU so I setup a cluster of new i5 NUC servers. I am a big fan of Intel NUC and have 6 at home and have yet to trip a circuit breaker, overheat my office or suffer from too much fan noise. The results on the i5 NUC are different than on the i3 NUC. On the i3 NUC MySQL 5.7 has much less of a regression from 5.6. While on the i5 NUC most of the regression is from MySQL 5.6 to 5.7. Perhaps one day I will have time to explain that, but I am too busy right now.

The results are in the order in which tests are run.

There is a small regression from 5.6 to 5.7/8 for update-index on the i5 NUC. This test requires secondary index maintenance as part of the update (read-modify-write of secondary index leaf pages). 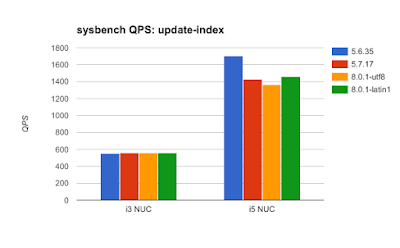 The regression for i5 NUC for update-nonindex is larger than for update-index. This test is less IO-bound than update-index because secondary index maintenance is not needed. 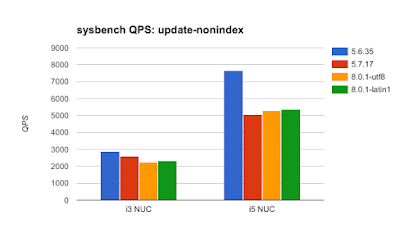 The regression for delete is worse on the i5 NUC. If fact, there isn't a regression on the i3 NUC. 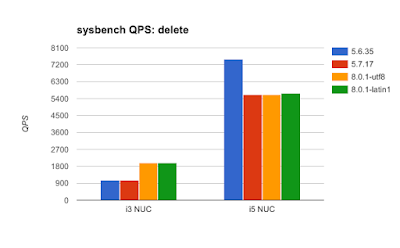 The regression for write-only is worse on the i5 NUC and there isn't a regression on the i3 NUC. 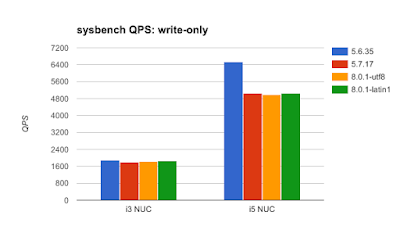 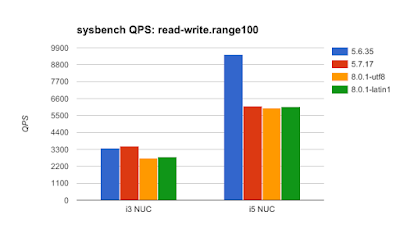 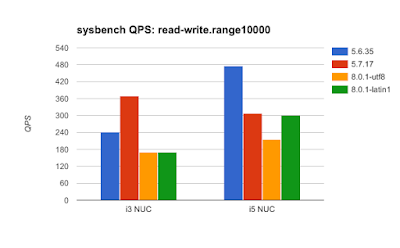 For read-only using latin1/latin1_swedish_ci improves QPS at 1000 and 10,000 row range scans with MySQL 8 compared to the default charset/collation. Again, MySQL 5.7 does great on the i3 NUC and does better as the range scan increases. MySQL 8 has regressions on both the i3 and i5 NUC and that isn't explained by charset. 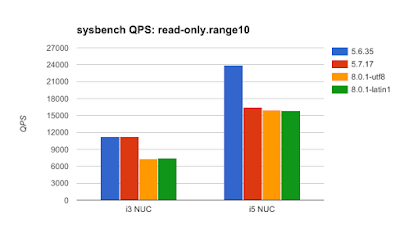 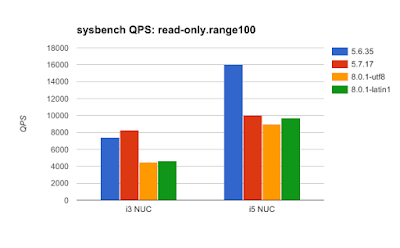 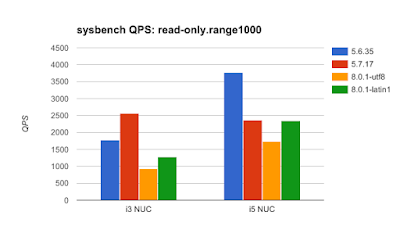 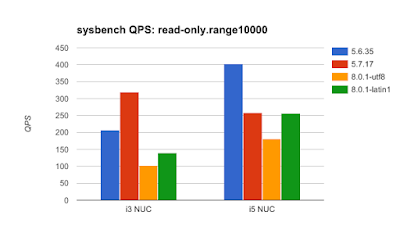 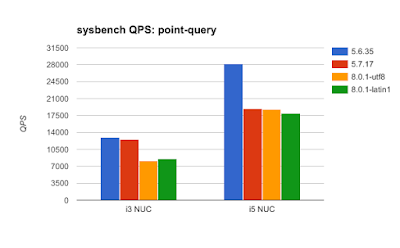 For insert the regression is larger on the i5 NUC. 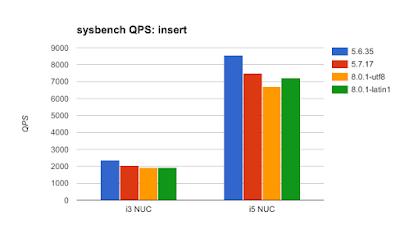 Posted by Mark Callaghan at 6:48 AM