This post compares MyRocks, InnoDB and TokuDB on the time required to load and index a table for sysbench.

I used my sysbench helper scripts with my sysbench branch and configured it to create 1 table with 800M rows. The binlog was enabled but sync on commit was disabled for the binlog and database log. The sysbench client shared the host with mysqld. The host has 48 HW threads, 50gb of RAM for the OS and MySQL and fast SSD. The test table is larger than RAM but it will take me a few days to get details on that. The test was repeated for MyRocks, InnoDB and TokuDB. I continue to use the IO-bound setup as described previously.

A sample command line for sysbench is:

Create index performance has more diversity. The table is larger than RAM, some of it will be read from storage and engines with compression (MyRocks.zstd, toku5717.zlib) suffer from decompression latency. The prefetch option doesn't help TokuDB in this case. InnoDB create index performance got much faster starting in 5.7. The ratio is the create index time for the engine divided by the time for InnoDB from MySQL 5.6.35.

These charts have the same data as the tables above. 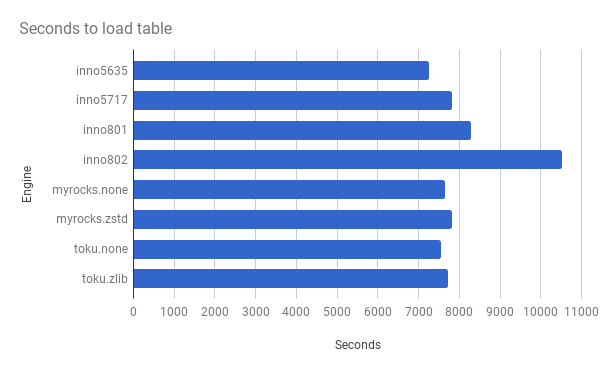 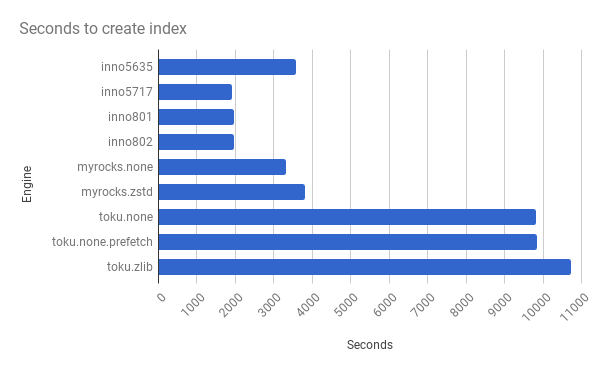 Posted by Mark Callaghan at 9:59 AM