I learned of the blocked bloom filter from the cuckoo filter paper (see here or here). RocksDB uses this but I didn't know it had a name. The benefit of it is to reduce the number of cache misses per probe. I was curious about the cost and while the math is complicated, the paper estimates a 10% increase on the false positive rate for a bloom filter with 8 bits/key and a 512-bit block which is similar to a typical setup for RocksDB.

I am always interested in things that use less space for filters and block indexes with an LSM so I spent time reading the paper. It is a great paper and I hope that more people read it. The cuckoo filter (CF) paper claims better space-efficiency than a bloom filter and the claim is repeated in the SlimDB paper as:


However, by selecting an appropriate fingerprint size f and bucket size b, it can be shown that the cuckoo filter is more space-efficient than the Bloom filter when the target false positive rate is smaller than 3%

The tl;dr for me is that the space savings from a cuckoo filter is significant when the false positive rate (FPR) is sufficiently small. But when the target FPR is 1% then a cuckoo filter uses about the same amount of space as a bloom filter.

The first graph shows the number of bits/key as a function of the FPR for a bloom filter (BF) and cuckoo filter (CF). The second graph shows the ratio for bits/key from BF versus bits/key from CF. The results for semisorted CF, which uses 1 less bit/key, are not included.  For the second graph a CF uses less space than a BF when the value is greater than one. The graph covers FPR from 0.00001 to 0.09 which is 0.001% to 9%. R code to generate the graphs is here. 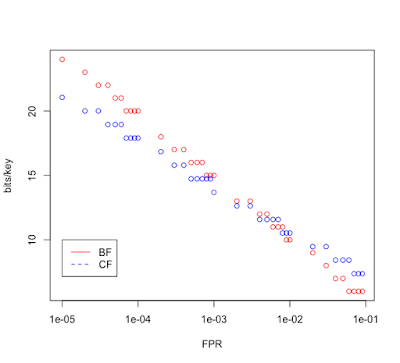 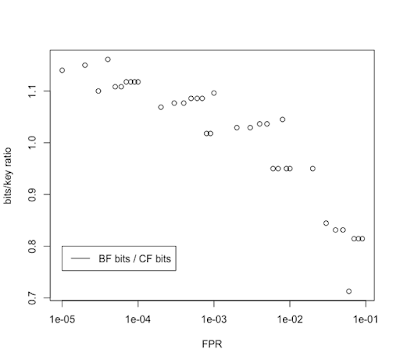 From the paper there is more detail on CPU efficiency in table 3, figure 5 and figure 7. Table 3 has the speed to create a filter, but the filter is much larger (192MB) than a typical per-run filter with an LSM and there will be more memory system stalls in that case. Regardless the blocked bloom filter has the least CPU overhead during construction.

Figure 7 shows the insert performance as a function of the cuckoo filter load factor. The CPU overhead per insert grows significantly when the load factor exceeds 80%.
Posted by Mark Callaghan at 12:15 PM