I spent a few days running linkbench to compare write-amplification between an update-in-place b-tree (InnoDB) and a write-optimized algorithm (TokuDB). There are a few changes that can be made to greatly reduce the bytes written rate for InnoDB. My co-workers had great success in doing this for a specific workload but might not have described the impact in public. So I will describe the changes using linkbench. Note that that bytes written rate is very important when using flash storage as device endurance is rated in terms of it. Reducing the rate can either extend the lifetime of the device or allow you to buy a lower endurance and less expensive device.

The changes to reduce the bytes written rate for InnoDB include:

The summary of the results below:

For InnoDB fsync-on-commit was enabled and the binlog was disabled. So this includes writes from the redo logs. InnoDB used a 4G or 8G redo log as indicated in each test result. InnoDB also used O_DIRECT and the doublewrite buffer was disabled. I don't have results for InnoDB with the doublewrite enabled. The write rates would be about 2X of what I report here which is about 4X worse than TokuDB in the worst case. When compression is enabled I used zlib and it is only used for the link and count tables. It is not used for the object table.

TokuDB used a 16k read block size and buffered IO. I also shared a much larger performance report with the TokuDB team but I am reluctant to share performance comparisons in public. I feel much better about sharing reports that show the benefit of a few changes to one DBMS. I used the default compression -- zlib. I repeated some tests for the uncached database using a larger read block size but QPS was much worse as I predicted. I also increased the TokuDB checkpoint interval from 60 seconds to 300 seconds for a few tests but that did not reduce the bytes written rate.

Write rates were measured by iostat. Note that all bytes written are not created equal. When small random writes are done so that the flash block cleaner (garbage collection) encounters a mix of live & dead pages while cleaning it must copy out (write) the live pages elsewhere. This is another source of write amplification and bytes written. I did not measure it but the impact on InnoDB should be much larger than the impact on TokuDB. A write optimized database that does large random writes, for example writes that are a multiple of the flash block size, will avoid some/most/all of the copy out. Note that I also describe all writes as random. Most busy DBMS workloads will have a variety of IO streams running concurrently on a small number of storage devices. From the perspective of the storage device this is likely to not look sequential.

For all of the tests I ran the workloads for many hours before taking any measurements to get the database into something resembling a steady state with fragmentation for InnoDB and dead versions of rows for TokuDB. I read many benchmark results for which measurements are done immediately after load and those results can be very misleading. It also helps to make sure the flash device is full so that flash GC is in progress when the benchmarks are running. I am reasonably sure that was true in this case.

The test server has 12 CPU cores and 24 with HT enabled. I used good flash devices.

The database configurations that I tested were:


For the first test I used a database that was cached by InnoDB and TokuDB. I configured linkbench to use maxid1=10M+1. The database size after initial load was much less than 20G for both InnoDB and TokuDB. 10 client threads each did 100M linkbench requests and the test took about 8 hours. A 4G redo log was used for InnoDB. 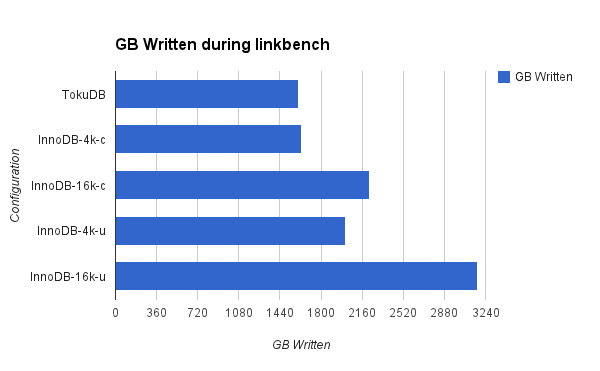 I repeated the test with maxid1=100M+1. In this case an 8G redo log was used for InnoDB. The database after load was 34G/66G for TokuDB/InnoDB and grew to 60G/102G. It was still cached by both TokuDB and InnoDB. For this test I used 20 client threads that each did 20M requests. The bytes written rate for InnoDB with 8k pages and 2X compression was about 2X the rate for TokuDB. I did not save metrics to look at page write rates by table. If most of the writes were done for the uncompressed node table then supporting 8k+2X compressed tables concurrent with 4k-uncompressed tables would be a useful feature for InnoDB. 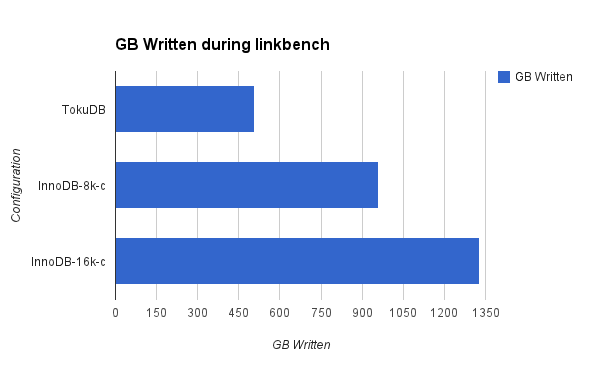 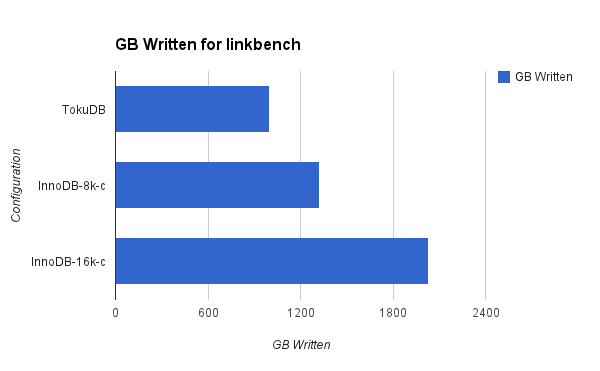 Posted by Mark Callaghan at 3:35 PM