The impact of read ahead and read size on MongoDB, TokuMX and MySQL

This continues my work on using a very simple workload (read-only, fetch 1 document by PK, database larger than RAM, fast storage) to understand how to get more QPS from TokuMX and MongoDB. I need to get more random read IOPs from storage to get more QPS from the DBMS. Beyond getting more throughput I ran tests to understand the impact of filesystem readahead on MongoDB and TokuMX and the impact of the read page size on TokuMX and InnoDB. My results are based on fast flash storage that can do more than 100,000 4kb reads/second. Be careful when trying to use these results for slower storage devices, especially disks.

In my previous post I wrote that I was able to get much more QPS from InnoDB but was likely to report improvements for TokuMX/MongoDB in the next post. This is the next post and some of the results I report here are better for a few reasons. First, some tests limited queries to the first half of each collection/table so the cache hit rate is much better especially for non-leaf index nodes. TokuMX and MongoDB are more sensitive to that and might require more cache/RAM for indexes than InnoDB. Second, I use better values for read_ahead_kb and readPageSize. My summary for this post is that:

I describe the impact of read_ahead_kb for TokuMX and MongoDB, the impact of readPageSize for TokuMX and the impact of innodb_page_size for MySQL. My test server uses fast flash storage and what I report here might not be relevant for disk storage. From past experience there isn't much difference in peak IOPs from disks using 8kb versus 32kb reads as the device is bound by seek and rotational latency rather than data transfer. But flash devices usually do many more random reads per second at 8kb compared to 32kb.

I have a lot of experience with systems that use direct IO, less for systems that do reads & writes via buffered IO and much less for buffered IO + mmap. The epic rant about O_DIRECT is amusing because there wasn't a good alternative at the time for any DBMS that cared about IO performance. I suspect the DBMS community hasn't done enough to make things better (reach out to Linux developers, pay for improvements, volunteer time to run performance tests, donate expensive storage HW to people who do the systems work). But I think things are getting better and better.

MongoDB uses buffered IO and mmap. To get peak QPS for an IO-bound workload it must read the right amount of data per request -- not too much and not too little. With pread you tell the OS the right amount of data to read by specifying the read size. With mmap it is harder to communicate this. When a page fault occurs the OS knows that is must read the 4k page that contains the faulting address from storage. The OS doesn't know whether it should read adjacent 4k pages by using a larger read request to avoid a seek per 4kb of data. Perhaps the workaround is to suggest the read size by calling madvise with the MADV_WILLNEED flag prior to referencing memory and hope the suggestion isn't ignored.

Reading 4kb at a time isn't good for MongoDB index pages which are 8kb, so the OS might do two disk reads and two disk seeks in the worst case. A 4kb read is also too small for documents that are larger than 4kb and the worst case again is extra disk reads. A partial workaround is to set read_ahead_kb to suggest to Linux that more data should be read. But one value for read_ahead_kb won't cover all use cases -- 8kb index pages, large documents and small documents. Note that this is also a hint. If you want high performance and high efficiency for IO-bound OLTP and you rely on read_ahead_kb then you aren't going to have a good time.

There isn't much information on the impact of read_ahead_kb on MongoDB and TokuMX. A simple way to understand the impact from it is to look at the disk read rate and disk sector read rate as measured by iostat. The number of disk sectors per disk read is also interesting. I report that data below from my tests. There is an open question about this on the MongoDB users email list and reference to a blog post.

InnoDB uses 16kb pages by default and the page size can be changed via the innodb_page_size parameter when installing MySQL. A fast flash device can do more random IOPs for 4kb requests than for 16kb requests because data transfer can limit throughput. TokuMX has a similar option that can be set per table via readPageSize. The TokuMX default is 64kb which might be good for disk-based servers but I suspect is too large for flash. Even on disk-based servers there are benefits from using a smaller page as less space will be wasted in RAM when only a few documents/rows per page are useful. For TokuMX the readPageSize is the size of the page prior to compression.


Setup for 1.6B documents

I used the same test as described previously except I limited queries to the first half of each table/collection and there were 1.6B documents/rows that could be fetched in the 8 collections/tables. I tested the configurations listed below. This lists the total database size but only half of the database was accessed.


Results for 1.6B documents

The graph below shows the best QPS for each of the servers tested: 8kb page_size for MySQL, 8kb readahead for tokumx8 and tokumx64, 4kb readahead for MongoDB. I exclude the results for MySQL 5.7 because they are similar to 5.6. As in my previous blog post MySQL with InnoDB does better than the others but the difference is less significant for two reasons. First I repeated tests for many different values of read_ahead_kb and display the best one below. Second the test database is smaller. I assume this helps MongoDB and TokuMX by improving the cache hit rate for index data -- MongoDB because the index isn't clustered so we need all of the index in RAM to avoid doing an extra disk read per query, TokuMX because the non-leaf levels of the index are larger than for a b-tree. MongoDB 2.6.0 does worse than 2.4.9 because of a CPU performance regression for simple PK queries (JIRA 13663 and 13685). TokuMX with an 8kb readPageSize is much better than a 64kb readPageSize because there is less data to decompress per disk read, there is a better cache hit rate and fast storage does more IOPs for smaller read requests. Note that the database was also much smaller on disk with an 8kb readPageSize. It would be good to explain that. 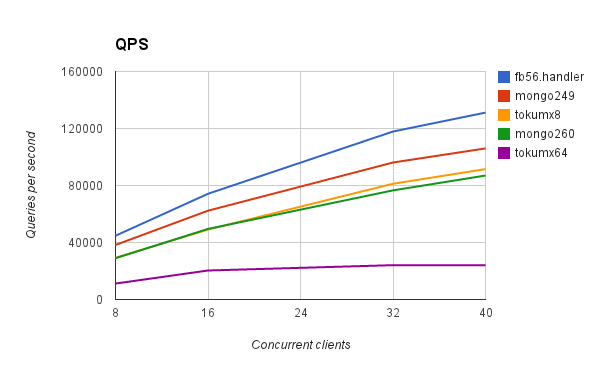 The next section displays the number of disk reads per query for some of the configurations to understand whether the server is efficient for IO. The result is from the 40 concurrent client test. Disk reads/query is much higher for TokuMX with a 64k readPageSize than for all other servers. The rate changes for MongoDB 2.4.9 and 2.6.0 between 8k and 16k readahead.


Setup for 3.2B documents

The same test was repeated except the clients were able to query all 3.2B documents/rows in the test collections/tables. I exclude results for TokuMX with 64k readPageSize,

Results for 3.2B documents

The graph has the best configuration for each server: 8kb page_size for MySQL, 16kb readahead for tokumx8, 4kb readahead for MongoDB. TokuMX matches MongoDB 2.4.9 here while it did worse than it in the 1.6B document test. 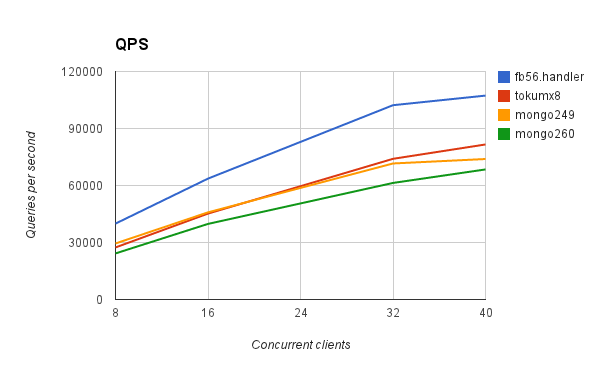 This has QPS results for all of the configurations tested. It should be possible for MySQL with InnoDB to get more QPS at 4kb pages. I don't know why that didn't happen and suspect that mutex contention was a problem. TokuMX with 8k readPageSize matched MongoDB 2.4.9 here, otherwise the results are similar to the 1.6B document/row test.

The next section displays the number of disk reads per query for some of the configurations to understand whether the server is efficient for IO. The result is from the 40 concurrent client test.  Note that TokuMX QPS gets much better as the rate decreases when a larger readahead is used.