I updated this blog post on Sunday, Oct 5 after first publishing it on Saturday, Oct 4. I added results for all versions with the InnoDB adaptive hash index disabled. I also corrected results for the setup that used innodb_thread_concurrency as my first round of results didn't really enable it. All graphs have been regenerated. But I don't write much about the new results here. That waits for another blog post.

I did similar testing for MySQL 5.6 in 2013 and opened bugs 68825 (Apr 2013) and 69236 (May 2013). They are still open and the regressions still exist in 5.6 and 5.7. Those bug reports are not specific enough to describe all of the sources of regression. A lot more work is required to explain the problem. I have yet to do that analysis and it isn't clear to me that others have done it. While I hope to do some of the debugging I also hope to motivate upstream to expand their public benchmark effort beyond high-concurrency workloads (replication and low-concurrency are also critical). This can't be a one time effort. Potential regressions arrive with each new commit to the upstream source repo, but my guess is that most regressions come over many diffs rather than 1 bad diff. On the bright side I think it is possible to automate testing to search for the source of perf regressions.

I have 4 new bug reports so far for 5.7: 74198 for a bad query plan with the Heap engine, 74166 for a compiler error, 74167 for a problem with InnoDB and ext-3 (already fixed in 5.7.6) and 74216 for a documentation improvement. From these tests I think I found a few more performance regressions but will save that for the next blog post.


This is an example command line to run a test with mysqlslap:

This has results for queries that scan and return 10 rows. In the many graphs that follow the results use the normalized response time (time for query / base case) where the base case is the response time for MySQL 5.0.85 at 1 thread. Tests were repeated for 1, 4 and 32 threads. There are several goals:

results for LIMIT 10 at 1-thread

These graphs show the normalized response times for the 10 row scan with 1 client. The two things that stand out for me are: 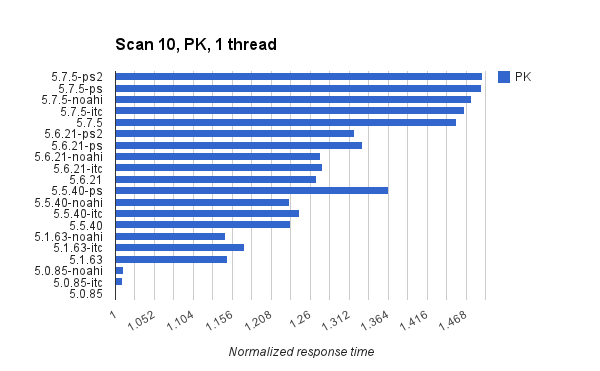 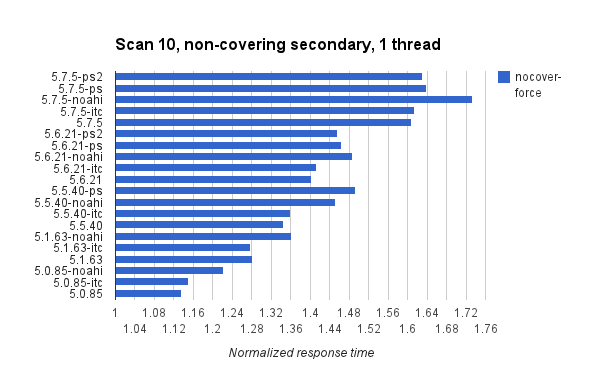 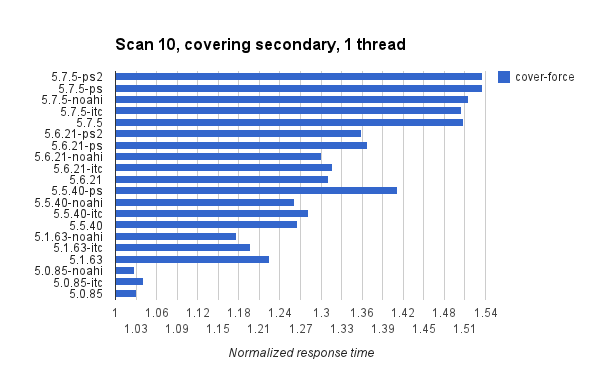 results for LIMIT 10 at 4-threads

Results here are similar to the 1-thread case but there is one difference. Concurrency improvements in recent releases reduce the regression for the non-covering secondary query in the second slide below. 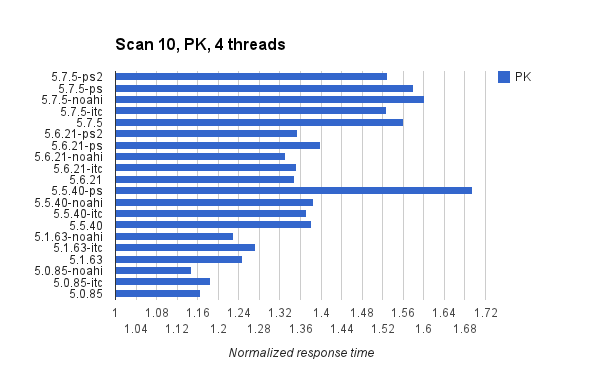 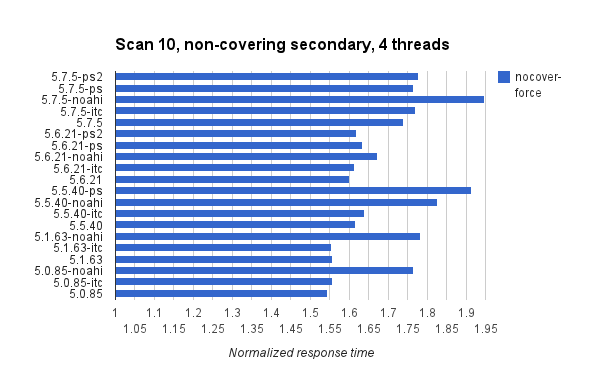 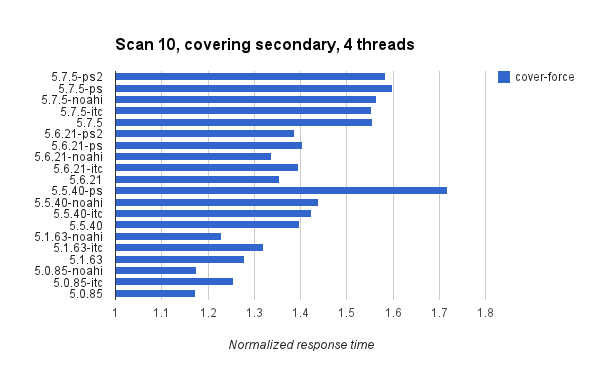 results for LIMIT 10 at 32-threads

Newer MySQL releases are much better than 5.0.85 at 32 threads. Here I use two graphs for each query and one truncates the response time graph to make it easier to see the differences between the newer releases. Note that problems at high concurrency exist in 5.0, 5.1 and 5.5. InnoDB took a huge step forward in 5.6 after taking a step backwards in 5.5. 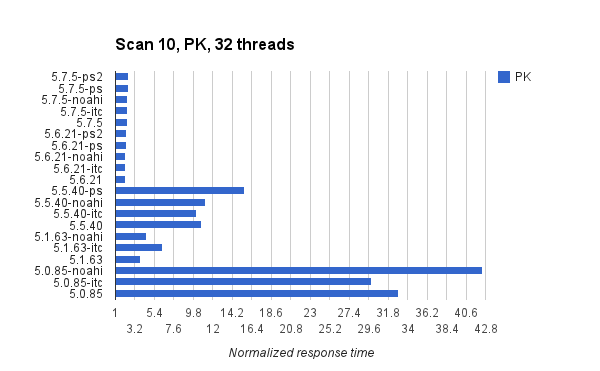 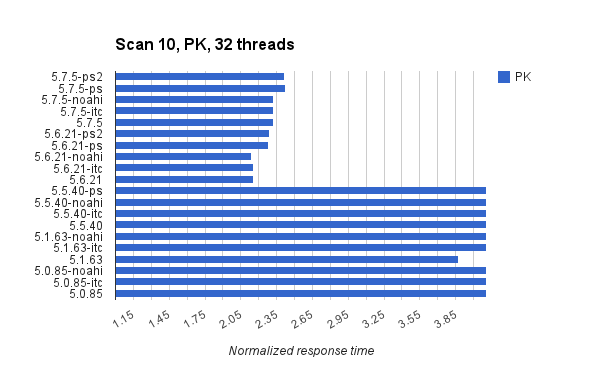 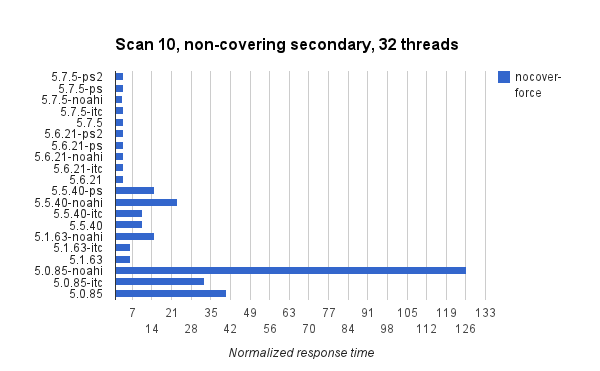 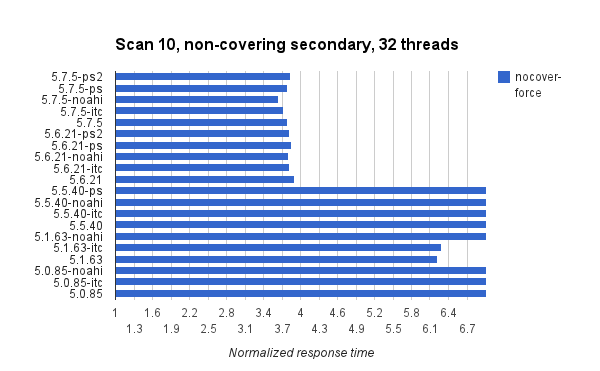 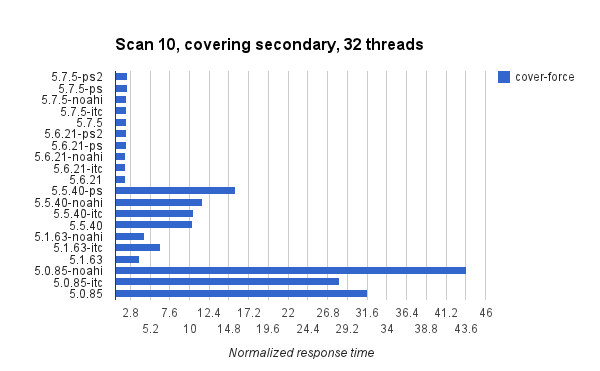 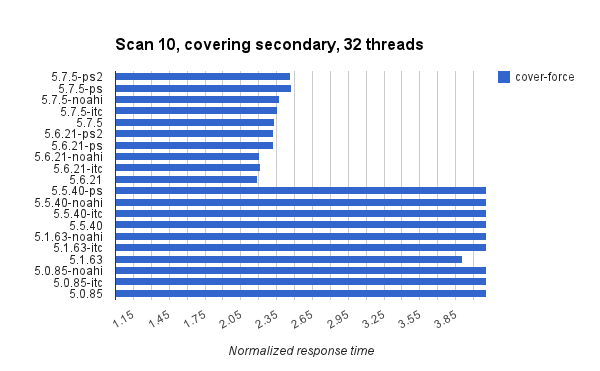 Now the test switches to a range query that scans & fetches 1000 rows. For the PK and covering secondary scans there is a regression in 5.1 and new releases show steady regressions. For the non-covering index scan performance has not regressed much in new releases. 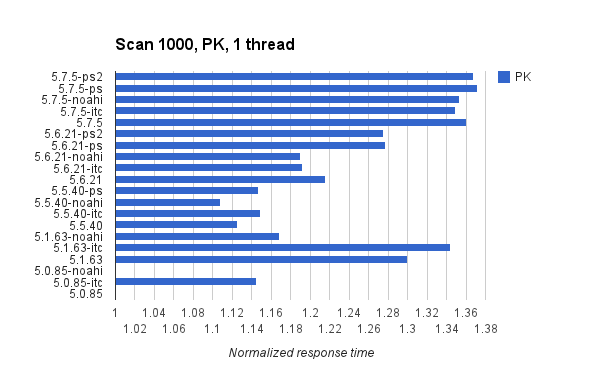 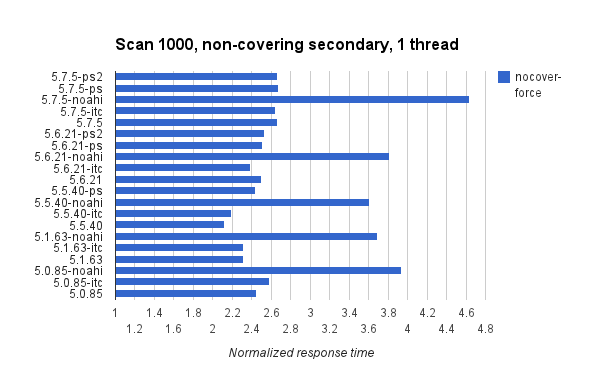 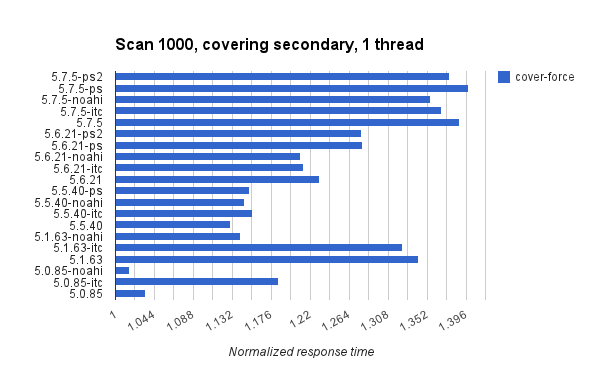 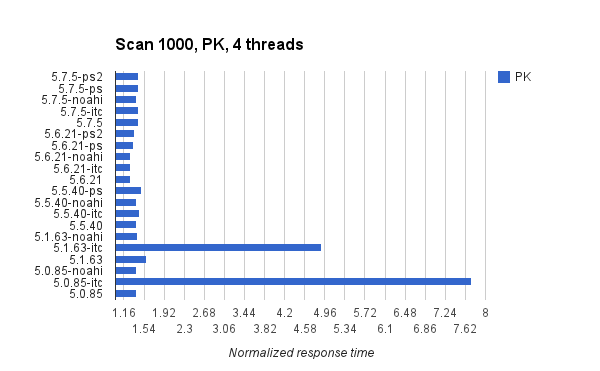 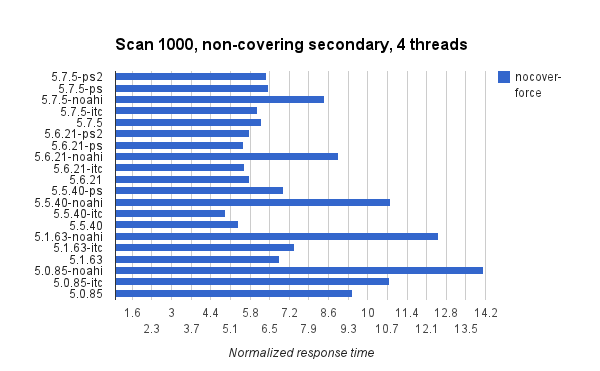 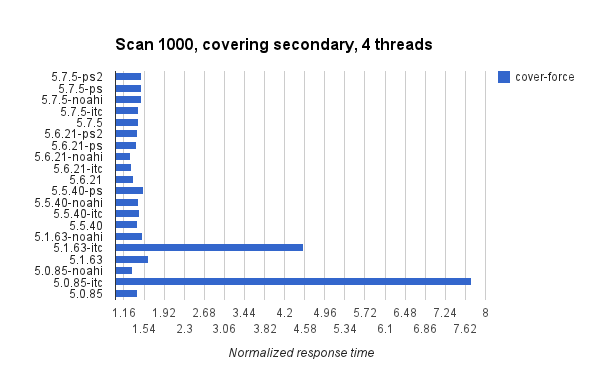 There must be replication lag in the Google spreadsheet client because the itc binaries below don't have results in the saved images even though they exist on my browser. New releases tend to do better than old releases. But there is a regression in 5.7 for the non-covering secondary index scan. More on that in my next blog post. 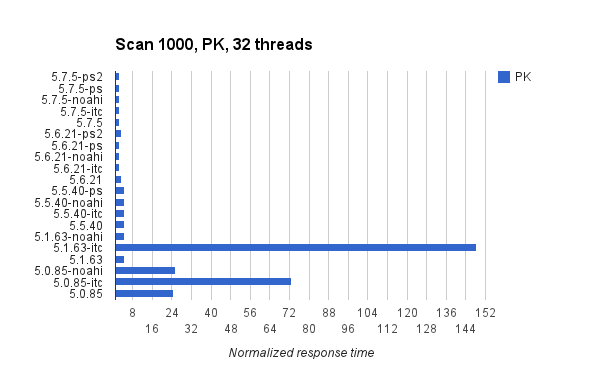 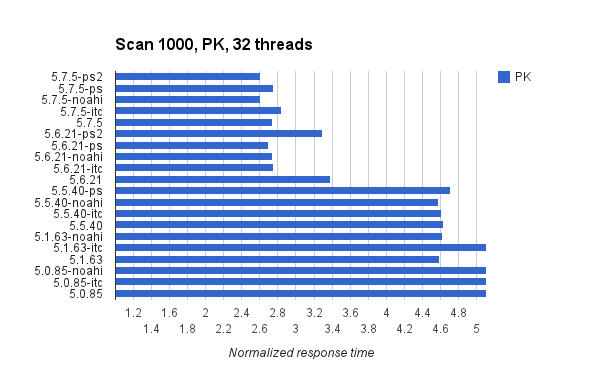 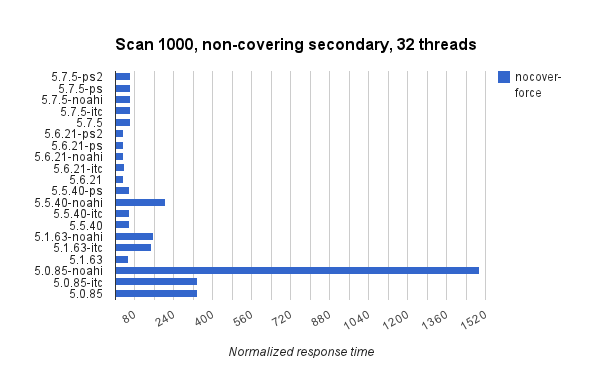 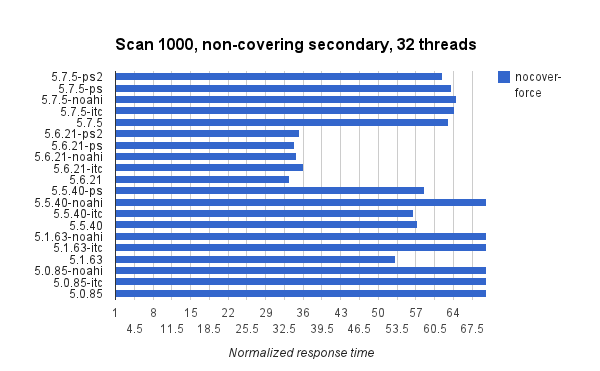 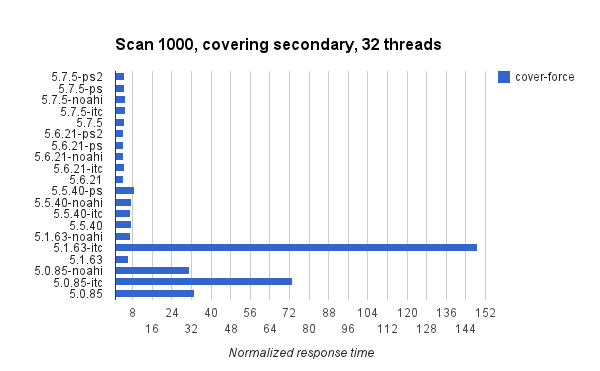 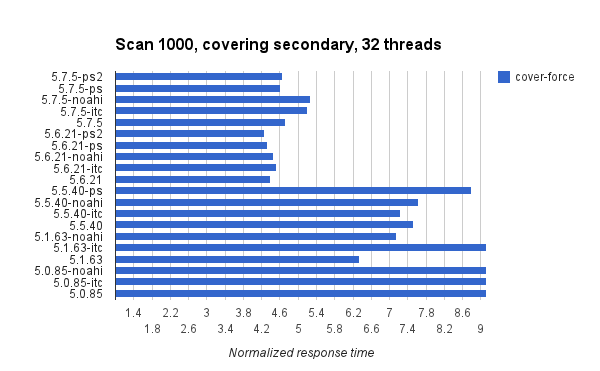 Posted by Mark Callaghan at 9:19 AM