Linkbench for MySQL and MongoDB with a large database

This has results for Linkbench where the database is much larger than RAM. I previously shared results for a database that can be cached in RAM.

I used Linkbench for MySQL and LinkbenchX for MongoDB as described in the Configuration section in a previous post. The value of maxid1 was set to 1,000,000,001 in the FBWorkload.properties file. For the cached database test that was set to 20,000,001. The test server has 144G of RAM, 40 hyperthread cores and PCIe flash. The tests were configured to use 10 threads for loading and 20 threads for queries. I disabled the binlog during the load for MySQL and enabled it during the query tests. The oplog was always enabled for MongoDB.

I don't report results for mmapv1 because the load would take too long and I might not have enough storage. I used WebScaleSQL for MySQL and the v3.0-fb MongoDB partners branch for MongoDB. The following configurations were tested:

Update - I ran a test for mmapv1 with maxid1=200M rather than 1B, so it has about 20% of the data compared to the others. I didn't have enough time or disk space to use the larger value with mmap. The data is below:

Some conclusions from the results:


Comparison with the cached database results

The table below shows the ratio of the rates from this test with the rates for the cached database. The goal is to determine how much performance degrades when the database is larger than RAM. The ratio is expressed as a percentage and 50% means that the rate for the uncached database was 50% of the rate for the cached database. Note that the load rates are close to 100% for RocksDB while InnoDB degrades a bit and WiredTiger degrades more. This is expected from a write-optimized algorithm like RocksDB and b-trees like InnoDB and WiredTiger.

The results for 2h for InnoDB are less accurate because mysqld was restarted as described in the previous section. For the 24h results MySQL degrades less than MongoDB and RocksDB degrades less than b-trees (WiredTiger & InnoDB).

And the same data in a chart... 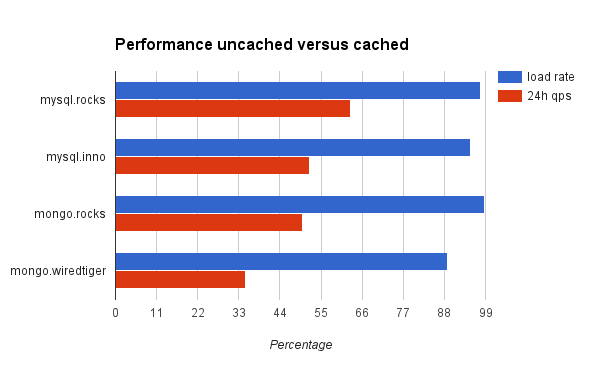