Linkbench for MySQL & MongoDB with a cached database

I used linkbench for MySQL and MongoDB to understand OLTP performance on an interesting workload. Here I post results for a cached database and in a few days I will have more results for a database larger than RAM. The summary is that MySQL is a lot faster than MongoDB even when using the same storage engine (RocksDB). I don't know all of the reasons for this and it is possible I made a mistake because this is the first time I have run linkbenchX for MongoDB. There are overheads in MongoDB that doesn't exist in MySQL, but I have not quantified the contribution from each. The ones that are interesting for this test include:

I am not sure that this workload is a great fit for MongoDB but it is a good benchmark for looking at OLTP performance and is less synthetic than the insert benchmark. The MongoDB version, linkbenchx, would benefit greatly from support for per-shard transactions. That is only available via TokuMX today. These tests were run without transactions and there might be races for transactions that need to atomically change the link and count collections.

A search by _id in MongoDB is more expensive than a search on the PK in MySQL for RocksDB and WiredTiger. With the clustered PK index in MySQL all of the columns are in the leaf page of the index. For MongoDB there are two indexes to search -- first the index on _id to find a DiskLoc and then the hidden index on DiskLoc to find the document.

A search on the natural PK for the link and count tables is also more expensive in MongoDB. First the search of the unique secondary index is done to find a DiskLoc and then the hidden index on DiskLoc is searched to get the document. For MySQL there is only one search using the clustered PK index.

I have yet to share quality-of-service metrics like p95 or p99 response time. Eventually I will do that.

I used WebScaleSQL for MySQL and the v3.0-fb MongoDB partners branch for MongoDB. The following configurations were tested:

And I used a my.cnf file that is too long to paste here. This is the schema for RocksDB and InnoDB. All InnoDB tables use 32 hash partitions to reduce mutex contention on the per-index mutex. All tables are compressed except for the node table with InnoDB because the average compression rate for rows in the node table is less than 2X. Four column families are used for the RocksDB tables, one for each index. All collections are in one column family for MongoDB+RocksDB The my.cnf settings for RocksDB are here. 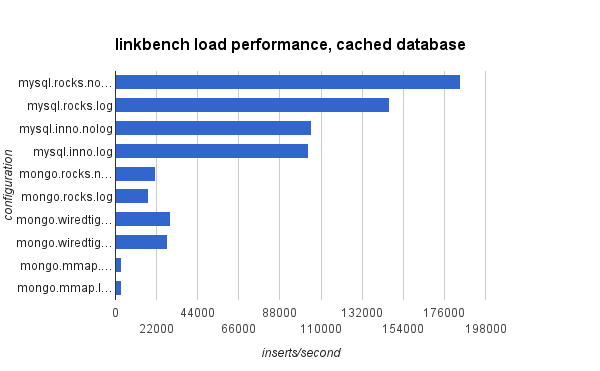 The average QPS was similar for MySQL+RocksDB and MySQL+InnoDB. They were both much faster than MongoDB. For MongoDB the best QPS is from WiredTiger. The MongoDB results match what I have gotten from other benchmarks and I have some faith these are accurate. 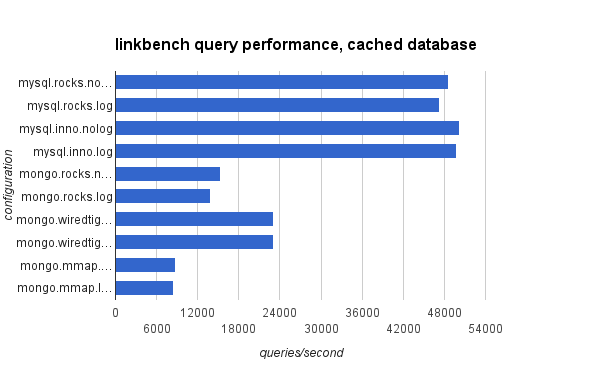 This lists all results per configuration. The 24 1-hour query tests were only done for a few configurations. The results include: