RocksDB inherited support for mmap from LevelDB. I was curious how performance with mmap compared buffered IO (pread) and ran benchmarks with db_bench. I haven't had great experiences with mmap for database workloads in the past but tried to be fair.

Longer than tl;dr
If the database doesn't fit in memory then issue 9931 means there will be significant overfetching on reads from storage and this will ruin performance. I assume the fix is to add madvise calls similar to the posix_fadvise calls used for buffered IO (pread).
With --cache_index_and_filter_blocks=false the RocksDB process might use more memory than you expect so be careful while chasing performance.  When it is true and --mmap_read=true then index and filter blocks will still be copied into the RocksDB block cache.
While --verify_checksum=false improves performance in some cases, it also prevents the use of checksums to detect file corruption on data blocks. Checksums for filter and index blocks read into the block cache are always checked regardless of the value of --verify_checksum because the BlockFetcher uses a ReadOptions struct with default values and the default for ReadOptions::verify_checksums is true (see here and here).
Configuration

The benchmarks were run with 32 client threads (--threads=32) and WAL sync disabled. The background writer was limited to 2MB/s.

The benchmarks were run in this order:

The database was loaded with 4B key-value pairs by fillseq. The throughput graphs show that results were lousy for mmap on the read-heavy benchmarks. On my server RocksDB with mmap was fetching ~100X more data per query compared to pread. While tuning filesystem options might have reduced the excessive fetching I am not sure it would prevent it and I am reluctant to change global options on a server to benefit one of the applications that use the server. The real fix and more stats on the excessive fetching are explained in issue 9931.

For pread and mmap the benchmarks used --verify_checksum=true and --cache_index_and_filter_blocks=true.

The graph shows throughput on the y-axis by benchmark + configuration on the x-axis. 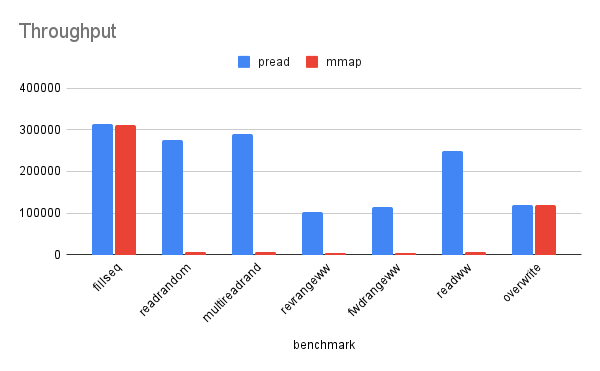 The database was loaded with 40M key-value pairs by fillseq. Results are provided for several configurations. Font size reduced to avoid spanning lines.

Setting --mmap_read also helps compared to pread but only when --cache_index_and_filter_blocks=false. It is possible that also enabling the option for compaction to pre-populate the block cache would allow pread to be as fast as mmap but I did not try it.

The graph shows throughput on the y-axis by benchmark + configuration on the x-axis. 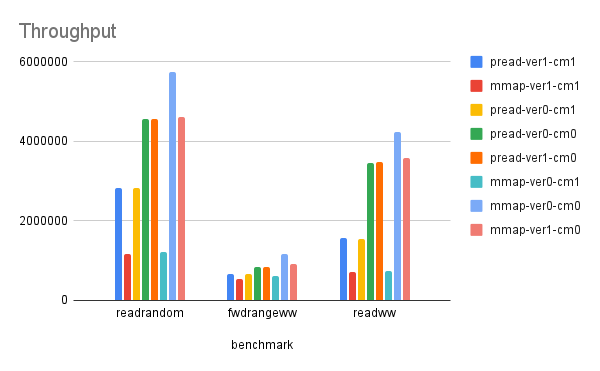 Posted by Mark Callaghan at 5:15 PM