RocksDB inherited support for mmap from LevelDB. Performance was worse than expected because filesystem readahead fetched more data than needed as I explained in a previous post. I am not a fan of the standard workaround which is to tune kernel settings to reduce readahead because that has an impact for everything running on that server. The DBMS knows more about the IO patterns and can use madvise to provide hints to the OS, just as RocksDB uses fadvise for POSIX IO.

Good news, issue 9931 has been fixed and the results are impressive.

I used db_bench with an IO-bound workload - the same as was used for my previous post. Two binaries were tested:

Note that git hash ce419c0f and 69a32ee are adjacent in the commit log.

The verify_checksums option was false for all tests. The CPU overhead would be much larger were it true because checksum verification would be done on each block access. Tests were repeated with cache_index_and_filter_blocks set to true and false. That didn't have a big impact on results.

The graphs have results for these binary+config pairs:

The improvements from the fix are impressive for benchmark steps that do reads for user queries -- see the green and red bars. The average value for the average read request size (rareq-sz in iostat) is: 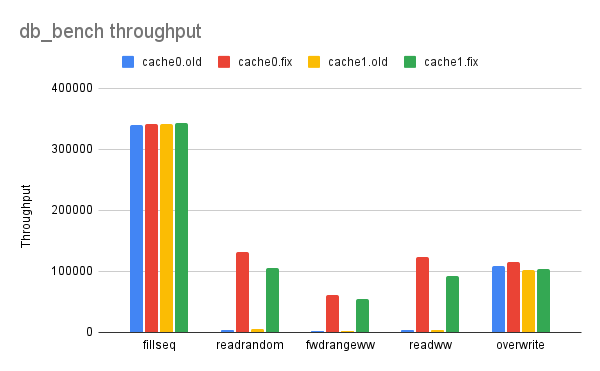 Tell me how you really feel about mmap + DBMS
It hasn't been great for me. Long ago I did some perf work with an mmap DBMS and Linux 2.6 kernels suffered from severe mutex contention in VM code. Performance was lousy back then. But I didn't write this to condemn mmap and IO-bound workloads where the read working set is much larger than memory might not be the best choice for mmap.