Benchmark
For an overview of the insert benchmark see here and here. I ran it for two configurations: cached and IO-bound. The benchmark is a sequence of steps. The steps and their names are:
For cached X=20M and Y=20M. For IO-bound X=500M and Y=10M.
The insert benchmark has a few problems so I will replace it later this year. The problems include:
Reports
Performance summaries generated by shell scripts are below. A short guide to these results is here.
Reports: cpu regression
These help explain performance especially the regressions for MySQL from 5.6 to 8.0. The cpupq column is the amount of CPU consumed per operation (insert or query). For a cached database the CPU overhead (cpupq) grows a lot from MySQL 5.6.51 to 8.0.31 with InnoDB. The growth is similar for MyRocks but I will skip that for now. Metrics for InnoDB/MySQL are here for 1 thread, 2 threads and 3 threads.
Reports: QPS differences
They also explain the difference in QPS between Postgres and MySQL for the q100.1, q500.1 and q1000.1 steps with the IO-bound setup. Using the 1 thread results for MySQL and Postgres:
Thus, Postgres does almost 8000 queries/s while MyRocks does ~2200/s and InnoDB is ~1000/s. But why does InnoDB do so much more IO/query. One guess is that secondary index accesses require a PK lookup to fetch the base row as explained here. The next guess is that insert buffer merges are too far behind. My final guess is that the secondary indexes are much larger for InnoDB than for MyRocks or Postgres. To rule out the first guess I might need to run a test where there are no writes in the background and InnoDB was able to catch up on purge prior to the test. One day I will explain this.

And today is the day for me to explain why InnoDB does too much IO/query. I rules out purge because history list length was ~0. I also ruled out the change buffer after getting the same result with it enabled or disabled. The root cause is MySQL bug 109595. The optimizer + InnoDB do too many disk reads thanks to records_in_range. With the fix the InnoDB QPS for q100.1 increases from ~1000/s to ~3500/s because disk reads/query drop from ~4.5 to ~0.02.
Reports: inserts with secondary index maintenance
The l.i1 benchmark step measures the insert rate when there are 3 secondary indexes to maintain. The insert rate for MyRocks is similar for the cached and IO-bound workloads. That is definitely not true for InnoDB and Postgres. The reason is that non-unique secondary index maintenance is read free for MyRocks. The rpq (reads/operation) column makes this clear. It is ~0 for MyRocks, ~0.5 for InnoDB and ~1.3 for Postgres with the IO-bound workload.
Reports: read+write and target insert rate
Postgres was unable to sustain the target insert rate (4000/s) for the q1000.1 benchmark step with 4 threads. These benchmark steps have N threads doing queries as fast as possible and then N more threads doing rate limited writes. In this benchmark there were 3 steps with 100, 500 and then 1000 inserts/s per thread and Postgres failed to sustain 1000 inserts/s/thread when there were 4 threads.

To understand the impact, first look at the IO/insert during l.i1 (inserts with 3 secondary indexes to maintain) using the rpq (reads/operation) and wpi (writes/insert) columns from the metrics tables for MySQL and for Postgres using the run with 1 thread.
Note that the rpq and wpi values for MyRocks are harder to compare with a B-Tree because much of the IO is from compaction using larger requests. The InnoDB doublewrite buffer also makes this complicated. So we can also look at rkbpq and wkbpi which are read KB/insert and write KB/insert.
The page size was 8kb for MyRocks, 16kb for InnoDB and 8kb for Postgres. The config files are here for MyRocks, InnoDB and Postgres.

But from the above, Postgres appears to be the least IO efficient for inserts because is does ~3 IOs (rpq+wpi) per insert, while InnoDB does ~1.6 and MyRocks does something much closer to zero. The impact of being less IO efficient is that the target insert rate of 4000/s cannot be sustained for the q1000.1 benchmark step from the combination of IO latency and IO demanded/insert. Metrics for q1000.1 with 4 threads and Postgres is here. More info on the IO capacity of the Beelink servers I used for the benchmarks will arrive soon in another post.
Graphs for the cached workload
These graphs have results from the cached workload for all of the DBMS. They make it easy to see both the regressions in MySQL and the lack of them in Postgres. 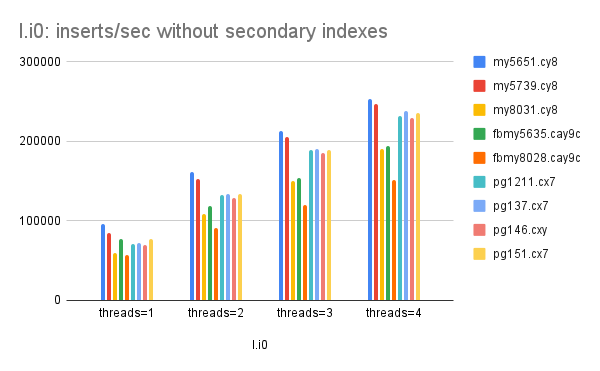 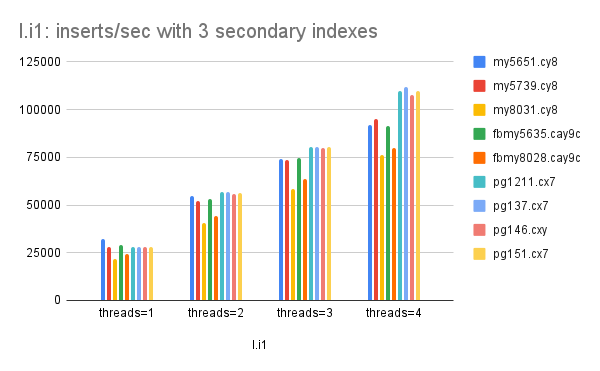 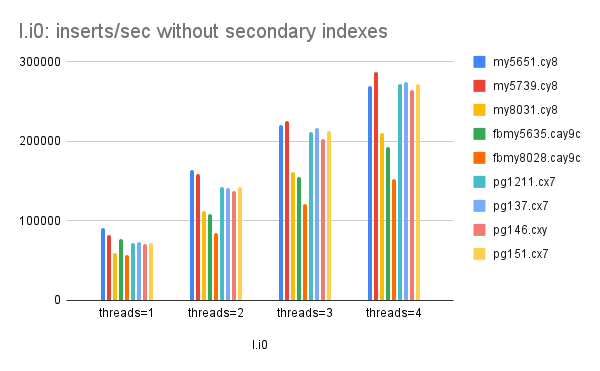 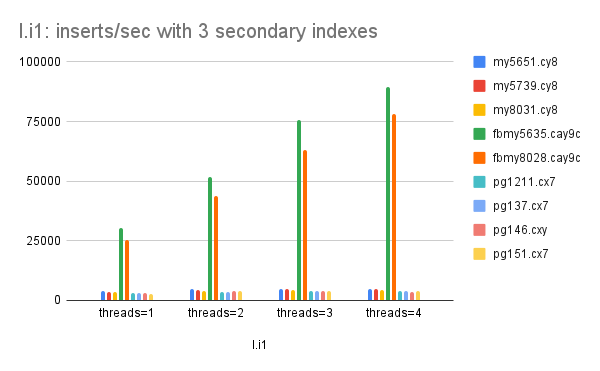 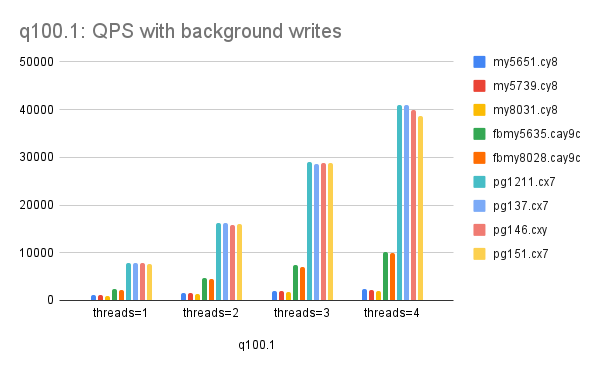