Making the case for MyRocks. It is all about efficiency.

I had two talks at Percona Live - one on MyRocks and another on web-scale. The talk links include the slides, but slides lose a lot of context. But first, the big news is that MyRocks will appear in MariaDB Server and Percona Server. I think MyRocks is great for the community and getting it into supported distributions makes it usable.

But performance in practice has nuance that theory can miss. While I expect read performance to suffer with MyRocks compared to InnoDB, I usually don't see that when evaluating production and benchmark workloads. I spent most of this year doing performance evaluations for MyRocks and MongoRocks. I haven't shared much beyond summaries. I expect to share a lot in the future.

My other goal is to explain the performance that I measure. This is hard to do. I define benchmarketing as the use of unexplained performance results to claim that one product is better than another. While I am likely to do some benchmarketing for MyRocks I will also provide proper benchmarks where results are explained and details on quality of service and efficiency are included.

Let me end this with benchmarking and benchmarketing. For benchmarking I have a result from Linkbench on a small server: Intel 5th generation core i3 NUC, 4 HW threads, 8G RAM, Samsung 850 EVO SSD.  The result here is typical of results from many tests I have done. MySQL does better than MongoDB, MyRocks does better than InnoDB and MongoRocks does better than WiredTiger. MyRocks and MongoRocks have better QoS based on the p99 update time in milliseconds. The hardware efficiency metrics explain why MyRocks and MongoRocks have more throughput (TPS is transactions/second). M*Rocks does fewer disk reads per transaction (iostat r/t), writes less to disk per transaction (iostat wKB/t) and uses less space on disk (size GB). It uses more CPU time per transaction than uncompressed InnoDB. That is the price of better compression. Why it has better hardware efficiency is a topic for another post and conference talk. 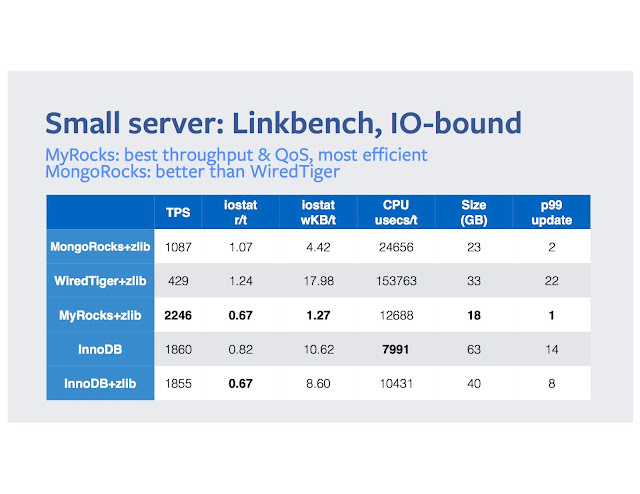 For benchmarketing I have a result from read-only sysbench for an in-memory database. MyRocks matches InnoDB at low and mid concurrency and does better at high-concurrency. This is a workload (read-only & in-memory) that favors InnoDB. 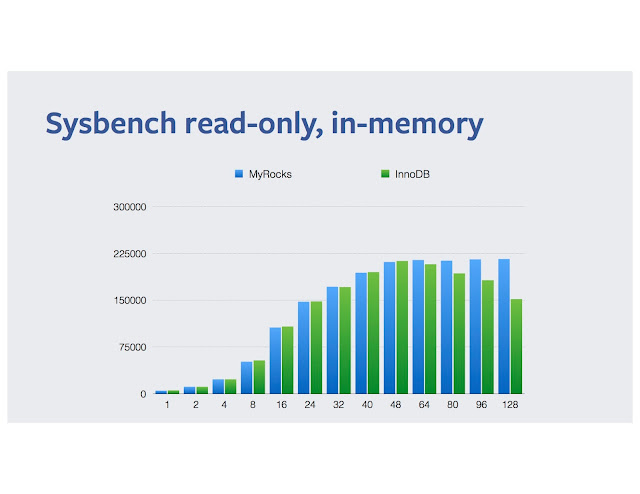