This post explains the insert benchmark with an IO-bound and high-concurrency workload for MyRocks, InnoDB and TokuDB. The goal is to understand throughput and efficiency for different storage engines and different versions of MySQL. The previous tests used an in-memory workload.

tl;dr - for an IO-bound, high-concurrency workload

The insert benchmark is described here. The test server has 48 HW threads, fast SSD and 50gb of RAM. The database block cache (buffer pool) was set to 10gb for MyRocks and TokuDB and to 35gb for InnoDB. The database was much larger than 50gb. The test was run with 16 tables and 16 query clients. For the read-write tests there is an additional writer client for each query client. The insert benchmark loaded the tables with 2b rows (125M rows/table), then did a full scan of each index (PK, 3 secondary, PK again), then two read-write tests. The first read-write test tries to insert 1000 rows/second per writer client while the other client does short range scans as fast as possible. The second read-write test is similar except the insert rate limit is 100/second per writer client. The scan and read-write tests use a client per table. With 16 tables there are 16 concurrent clients. 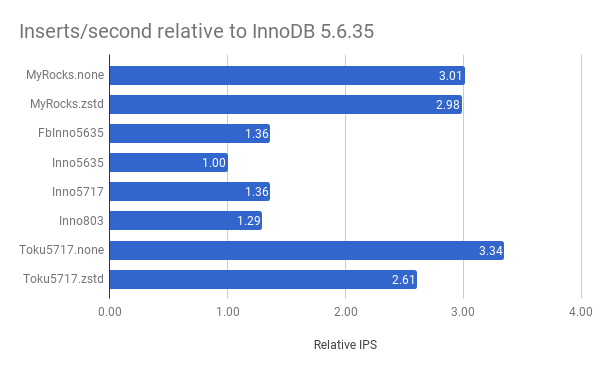 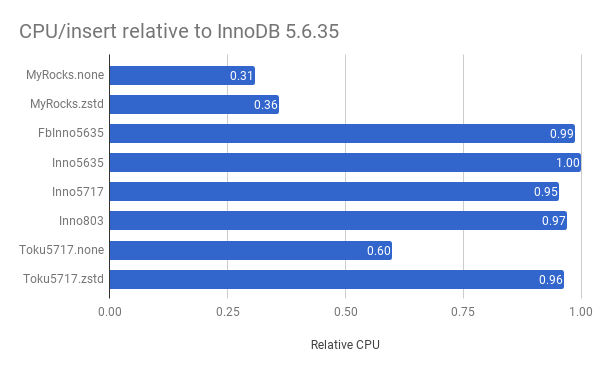 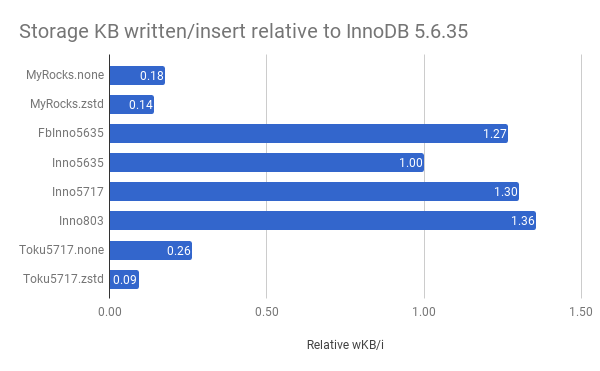 MyRocks and TokuDB read less from storage per insert. There are two possible reasons for this. First, non-unique secondary index maintenance is read free. Second, the index might be smaller with them and remain in cache. I am not certain which of these explains it. 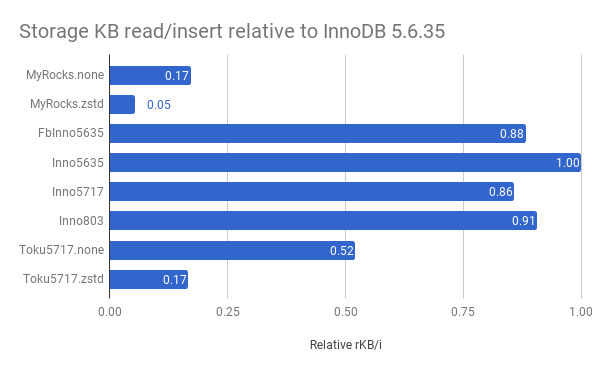 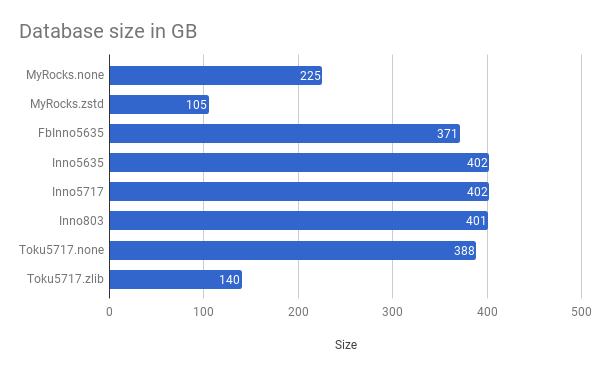 This graph shows the scan time for the PK index and and all of the secondary indexes. The value is relative to the time for InnoDB 5.6.35. The absolute value in seconds is here in the scan section. The number for the PK scan is from the second scan of it. The graph excludes FbInno5635 for readability and that version of FbInno5635 has a perf bug for concurrent scans (since fixed). The scans are concurrent and there are 16 clients each scanning indexes from separate tables.

The graph has two extra configurations: MyRocks.none.ra, MyRocks.zstd.ra. Both of these enabled filesystem readahead in RocksDB. For this workload InnoDB suffers from b-tree fragmentation for the secondary indexes but probably not for the PK. That might explain the MyRocks perf results for PK vs secondary scans. 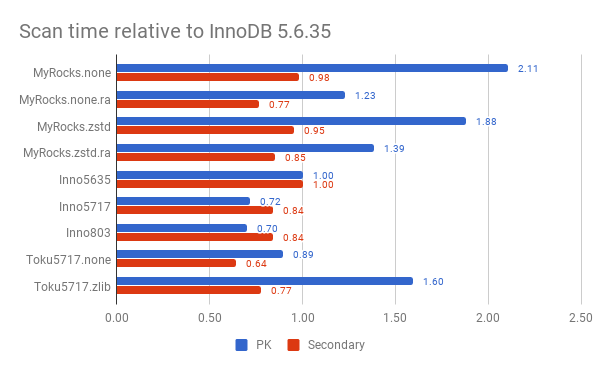 This section has results for the read-write test when the writer is limited to 1000 inserts/second, there are 16 tables and a reader/writer pair per table. The first graph has the QPS for short range queries. The second graph has the CPU/query. Both use values relative to InnoDB 5.6.35. All storage engines sustained the target insert rate of 16,000 rows/second. 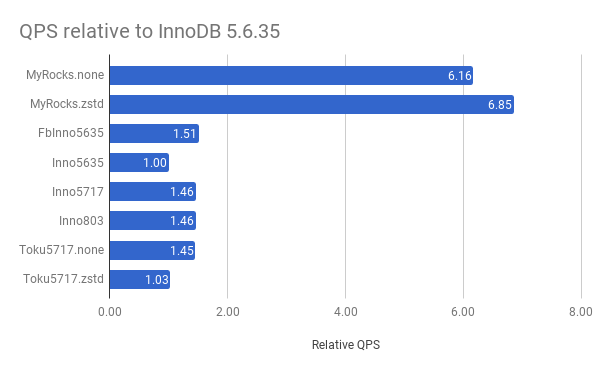 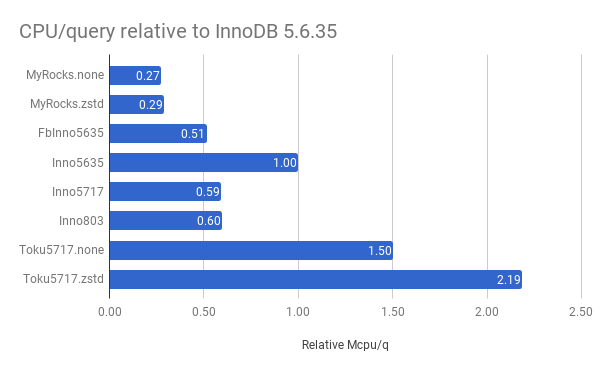 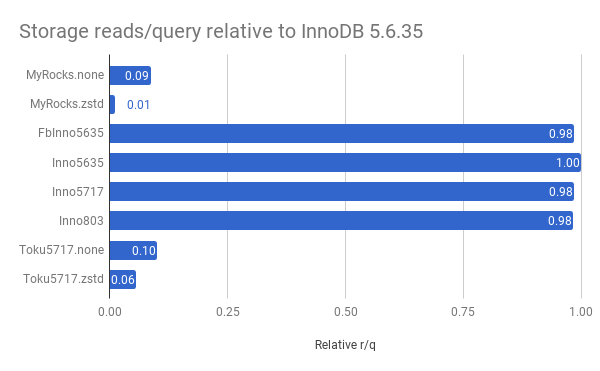 Read-write, 100 inserts/second
This section has results for the read-write test when the writer is limited to 100 inserts/second, there are 16 tables and a reader/writer pair per table. The graph has the QPS for short range queries with values relative to the value for InnoDB 5.6.35. MyRocks gets ~4X more QPS than InnoDB here while it got 10X or more in the previous section. The reason is that the write rate is lower on this test, so InnoDB uses less write IO and has more capacity for reads. 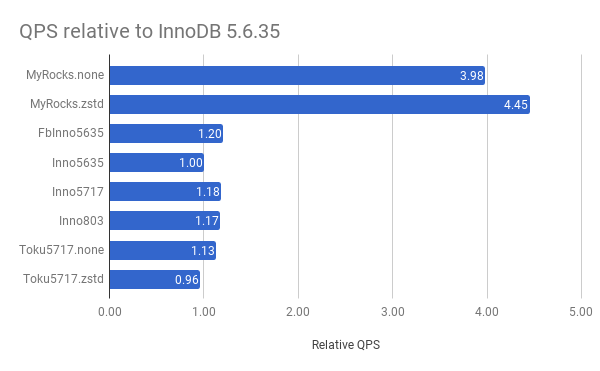