I used tpcc-mysql from Percona with my helper scripts. The test was run with 1000 warehouses and 20 customers. The database is larger than memory. The test server has 48 HW threads, fast SSD and 50gb of RAM. The database block cache (buffer pool) was 10g for MyRocks, 10g for TokuDB and 35g for InnoDB.

The test pattern is load and then run 12 hours of transactions in 1 hour loops. Results are reported for the last hour of transactions. I used 1000 milliseconds as the response time SLA.

Tests were run for MyRocks, InnoDB from upstream MySQL, InnoDB from FB MySQL and TokuDB. The binlog was enabled but sync on commit was disabled for the binlog and database log. All engines used jemalloc. Mostly accurate my.cnf files are here.

The performance schema was enabled for upstream InnoDB and TokuDB. It was disabled at compile time for MyRocks and InnoDB from FB MySQL because FB MySQL 5.6 has user & table statistics for monitoring.

The graphs are from the 12th hour of the transaction test. All of the data is here.  I adjusted iostat bytes written metrics for MyRocks because it currently counts bytes trimmed as bytes written which is an issue for RocksDB but my adjustment is not exact.

The first graph has the TPMC for an engine and the values are relative to the TPMC for InnoDB from upstream MySQL 5.6. TPMC is transaction throughput. 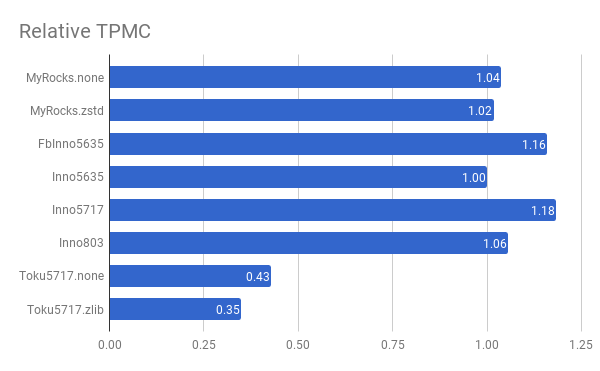 The next graph has the CPU overhead per TPMC and the values are relative to upstream InnoDB 5.6. A value > 1 means that the engine uses more CPU/transaction than the base case. 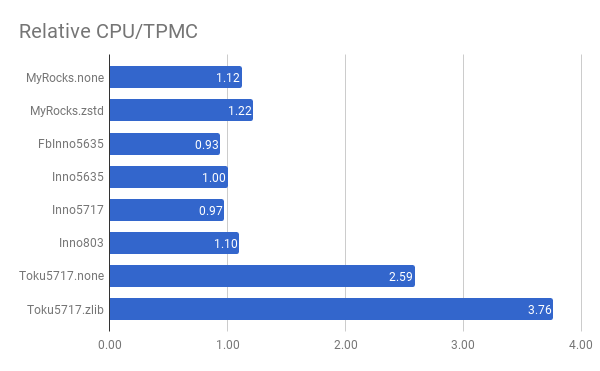 This graph has the KB written to storage per TPMC and the values are relative to upstream InnoDB 5.6. MyRocks is more write efficient as InnoDB writes ~3X more to storage per transaction. 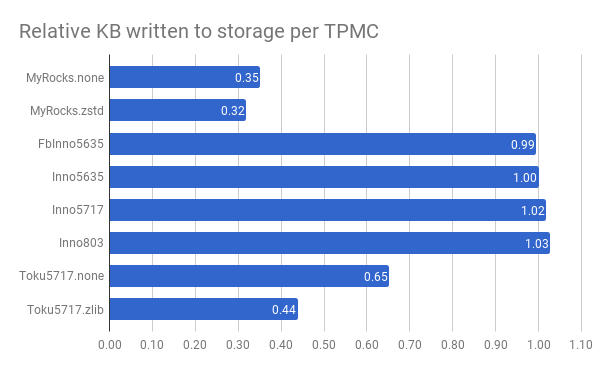 The next graph has iostat read operations per transaction. The values are relative to upstream InnoDB 5.6. The absolute values are small, most are less than 0.10. While the test database is larger than memory the working set almost fits in memory. I tried using 2X more warehouses, but that takes longer to load and didn't change the read/transaction rate by much to justify the extra time. 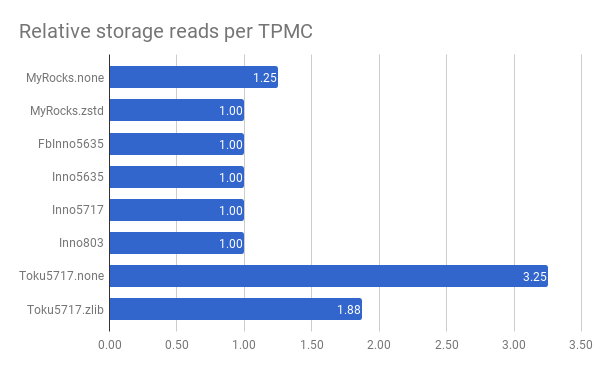 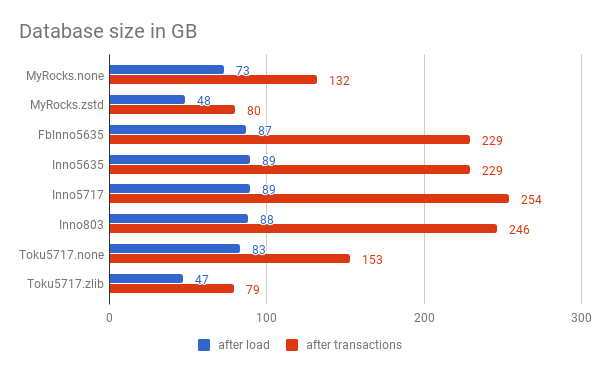 Posted by Mark Callaghan at 9:29 AM